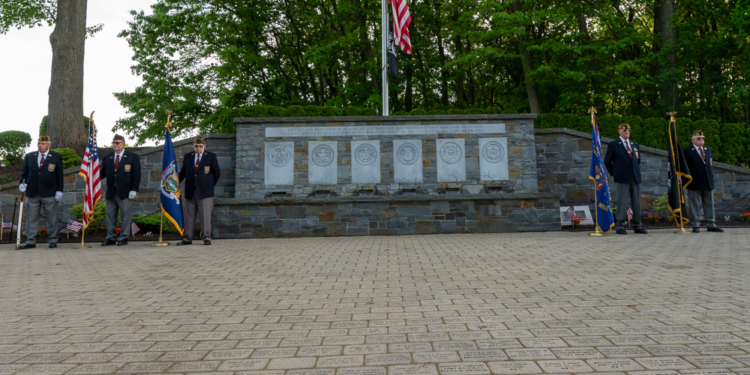 COLONIE — The town held its first Memorial Day service at the Crossings since 2019 on Wednesday, May 25, but the message was the same as it has been for years— never forget.

“Today we remember those who have come before, giving dedicated service to America and especially those who have given all,” said Charlene Robbins, a Gold Star Mother. “Freedom and democracy are the result of the most honorable this country has produced. Today we stand to remember the most honorable among us, and we must continue to carry the burden of their sacrifices unless we lose sight of what true freedom is. Let us thank God for America and for the men and women who have given all in their service to her.”

The formal ceremony at the Veterans Memorial at the Crossings Park was canceled the last two years because of COVID-19. The names of 58 town veterans whose names were added to the memorial on paved stone since the last service were read aloud.

In front of the podium, was a small table draped with a white cloth with one empty chair. Since the end of the Vietnam War, the POW/MIA table and the explanation behind each facet is one of the most poignant moments of many Memorial Day ceremonies across the country.

As explained by Jerry Perry, of the American Legion Joseph E. Zaloga Post 1520:

“The table is small. Symbolizing the frailty of one prisoner alone against his or her suppressors.

“The table cloth is white. Symbolic of the purity of their intentions to respond to their country’s call to arms.

“The single rose in the vase signifies the blood they may have shed in sacrifice to ensure the freedom of our beloved United States of America. It also reminds us of the family and friends of our missing comrades who keep faith while awaiting their return.

“The red ribbon on the vase represents an unyielding determination of a proper accounting of our comrades who are not among us.

“The slice of lemon on the plate reminds us of their bitter fate.

“The salt sprinkled on the plate reminds us of the countless fallen tears of families as they wait.

“The glass is inverted. They cannot toast with us at this time.

“The chair is empty. They are not here.

“The candle is reminiscent of the light of hope which lives in our hearts to illuminate their way home from their captors to the open arms of a grateful nation.

“The American Flag reminds us that many of them may never return and have paid the supreme sacrifice to ensure our freedom.”

“Those who have served and those currently serving in the uniformed services of the Unites States are ever mindful of the sweetness of enduring peace has always been tainted by the bitterness of personal sacrifice,” Perry said. “We are compelled to never forget that while we enjoy our daily pleasures there are others who have endured and who may still be enduring the agonizes of pain, degradation and imprisonment. They are unable to be with their loved ones and families so we join together to pay humble tribute to them and to bear witness to their continued absence.”

The Colonie Veterans Memorial was unveiled in 2009 and outside of 2019 and 2020 the town has held a ceremony at the Crossings on Memorial Day complete with a laying of the wreaths, taps and dignitaries. This year Jim Haas, chair of the Colonie Veterans Memorial Committee served as MC. Speakers included Assemblyman Phil Steck, Village of Colonie Mayor Thomas Tobin and Colonie Supervisor Peter Crummey.

Crummey, who is attending the ceremony as supervisor for the first time, talked about his father, who served in World War II and who has his name on a paver in front of the striking memorial cut into a bank near the playground at The Crossings.

“I, together with my five children, have the great fortune to live today and live in freedom, thanks to my dad, who passed away at age 93, and survived his fight for our freedom in the Pacific Theater,” said the first year supervisor. “My children also had the benefit of hearing first-hand about his experience and also learning the true value of his effort and the efforts of those soldiers standing with him. More importantly, though, as we look to our families and neighbors who lost a loved one so we can have the freedom to assemble here today, we recognize the significant cost of that freedom.”

New this year was a parade through The Crossings culminating at the Veterans Memorial.

“Planning the parade involved many moving parts, including reaching out to local organizations, scout units, fire departments, and marching bands to get marchers, coordinating details with the town regarding the use of the park, putting together the marching order, and more,” said Fox Rifenberg-Stempel, one of the organizers. “But it was worth the effort in order to recognize the fallen soldiers that fought for our town and the country.”