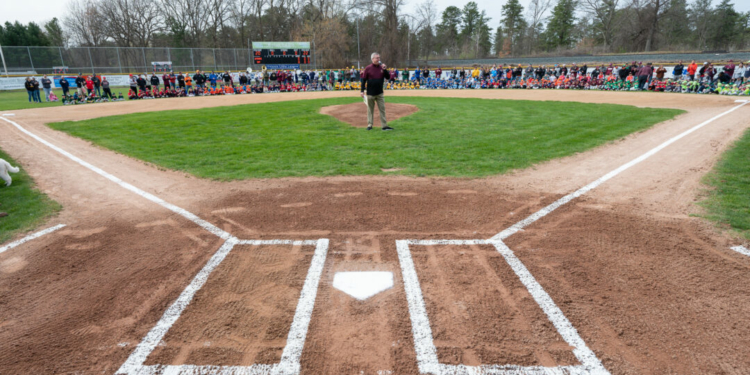 COLONIE – Little League baseball in communities across the county reflects a sense of Americana as the words “play ball” ring out from behind home plate each spring.

The Village of Colonie and its relationship with Colonie Little League takes that reflection one step further because of the synergy between the village and the area’s young players. Each spring, for at least 35 years, the village closes the roads around Cook Park on Opening Day so residents and parents can line a parade route to the league’s fields nestled in the southwest corner of the park.

“We had at least 1,000 people in the park this year,” Colonie Little League President Rodger Wyland said. “It really is a big deal. We had 10-15 dignitaries and about 400 kids.”

On Saturday, April 23, the UAlbany Marching Band led fire trucks and the young players to the five fields that abut the CSX rail line that defines the Village’s southern boundary to hold opening ceremonies.

Just like most Opening Day ceremonies, Colonie teams packed the field before games began. One moment that stood out was the honoring of volunteers that passed during the off season. This year the league honored Kevin Kopach, who served for 27 years and past league President Dennis Mihalski, who gave 14 years to local baseball.

“We have such strong support from people in our community and it is year after year,” Wyland said.

This tradition runs deep in Colonie, all the way back to the league’s formation in 1955 and its survival as the town experienced explosive economic growth.

Baseball teams existed in the area in the early 1900s, but they were run by local businesses and outside of a formal league. It wasn’t until 1939 Little League baseball formed in Williamsport, Pennsylvania and spread to the Capital District in 1953.

“Before 1955, there were teams that would find a field and play, but there wasn’t the consistency,” Colonie Little League Historian Milt Schmidt said.  “The original organizers decided to join because of the rules and structure of Little League.”

The games were played at Exchange Park, just off Wolf Road where DeNooyer Chevrolet is currently located, on land owned by the Bergbold family, but the development of Wolf Road disrupted and displaced baseball.

Luckily, a forward thinking village came to the rescue by using that same growth to find a place the Colonie Little League could call home.

The construction of the Adirondack Northway created an opportunity because a piece of land was cut off and not accessible to the city of Albany. It was perfect for a recreation area. In July 1964, the Village Board of Trustees negotiated with the City of Albany to purchase 27 acres to create Cook Park.

Then Mayor William Cook, for whom the park is named, also asked for volunteers to clear the trees on the property to make way for the athletic fields. A local development firm, John T. Garry, Inc, built the road to the park at no cost.

At the same time, then Colonie Little League President Fred McDonald, saved $12,000 in reserves.   He figured the league would need it when its lease on the Wolf Road field expired and wasn’t renewed.

In the mid 1960s the partnership with the village began and a new home at Cook Park took shape. The village board voted to lease four acres of land on Oct. 25, 1965 to Colonie Little League for $5 per year. That fee has now risen to $50, according to Schmidt.

Working together is the secret sauce that makes youth baseball in Colonie successful on the field and in the community.

“I worked closely with [Village Mayor] Frank Leak and he was so supportive and now Mayor [Thomas]Tobin has picked up where he left off,” Wyland said. “For them it is all about the kids. It always has been. Whatever we asked for, they never said no.”

An example of this partnership in action was the installation of lights at Cook Park.

“We put up lights about 20 years ago on our field. We worked it out with the mayor and the village board to get it done,” Schmidt said. “There was some concern about light leaking outside the park, but we worked together to make sure it would not be a problem.”

According to Schmidt, the mayor personally visited residents who had concerns about the project and made sure they were heard.

Now the lights come on every Friday night for baseball.

Success on the field

A few years after the move to the new facilities, players from Colonie reached the top of the Little League world.

“In 1973 the first team from Colonie made it to the Little League World Series,” Schmidt said. “That is when we made it to the national spotlight. It is a very big deal.”

That tradition continues today, including a Colonie team winning the New York State Little League title last year. Those players returned to the field and the parade to be honored, but Wyland says it doesn’t start with championships.

“We have been fortunate that way, in terms of winning at the regional and state level, but you do not do that well without having strong programs at the lower levels,” he said. “We want to make sure this is right for our rec league players, not just the travel leagues.”

This is evident by the 10 t-ball teams this year and that the league does not charge to participate at that level. This season there are 37 teams total in the league.

“You want to run a league with dedicated people and it has been like this forever,” Wyland said, referring to the 40 volunteer Board of Directors and 15 Executive Board members that run the league.

The Colonie Little League mission is funded by the local business community through sponsorships. There is a waiting list to sponsor a team.

“Our sponsorships (from the community) have been really incredible year over year,” He said.

“Honestly, we couldn’t be as good as we are without their support.”

The support also allowed for the creation of the Challenger League for athletes with disabilities.

This season, 37 disabled athletes currently participate in the program that make up two teams.

“We provide assistance to those kids to allow everyone to enjoy the game of baseball,” Schmidt said.

“Our major teams come down on Saturday morning to be buddies with the challenger athletes,” Wyland said. “It really changes lives on both sides. You should really see it. It is amazing.”