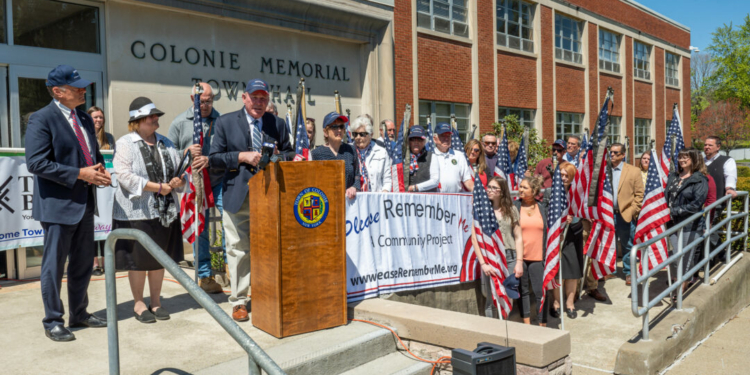 Tom Regan, founder of the Please Remember Me Project speaks at a ceremony kicking off the project’s 10th year. Jim Franco / Spotlight News

COLONIE — It has become a familiar site over the past decade to anyone who travels along Route 9 and on Monday, May 9, the 10th consecutive Please Remember Me Project kicked off on the steps of Town Hall.

“Ten years ago I started this thing and I actually had no idea where it was going to go,” said Tom Regan, who founded the project. “I knew I lost my friends, and I tried to do something to remember them.”

He said it was a struggle at the beginning, not only the logistics involved with hoisting 165 flags along four miles of one of the busier thoroughfares in the Capital District, but getting permission from all those involved and obtaining the necessary funding for the project.

In addition to the town, which was fully behind the project, Regan pointed to Trustco Bank and National Grid as vital partners over the past decade.

“They knew if we could get it off the ground it would work and the people would respond and the community has responded,” said the National Grid lineman of 37 years.

He said the hardware was put together by Albany Metal Fabrication and bolted to the some 165 utility poles by National Grid crews. The brackets are “made to last” and while there are new flags flown each year, the brackets are used over and over.

“With the help of our community, with the help of everyone, these flags will fly every single year and they will honor those 1,900 men and women who gave their lives for us in the Capital Region,” he said during a ceremony on the steps of Town Hall where some two dozen residents and employees held the American Flags that will soon fly from the poles.

Each flag represents 10 soldiers from the Capital District who made the ultimate sacrifice since World War I.

On hand for the event was Charlene Robbins, a Gold Star Mother whose son, Staff Sgt. Thomas Robbins, was killed in 2004 during the Iraq War as he tried to save the lives of his fellow soldiers during a mortar explosion.

She talked about how the pain of losing a loved one never goes away for anyone in the family, including mothers, fathers and siblings.

“They soldier on, they do what they need to do and they are raising families of their own but the pain is always there so we do our best to deal with it and remember them,” she said.

Once the flags are hoisted by National Grid they will fly until Labor Day and they will be taken down, Regan said. They will fly again during an Oct. 10 ceremony at The Crossings. While the flags have flown along Route 9 for a decade, this is the first year there will be a Walk of Honor where students from Shaker, Colonie and CBA high schools will participate in a parade carrying the flags and be joined by town fire and police departments and elected dignitaries.

“Young people will be carrying the same flags you see right now,” Regan said. “It will be an emotional event for our Gold Star Families but it will be a patriotic event. We celebrate their lives, but we understand, and young people today have to understand the true cost of freedom.”

Supervisor Peter Crummey said the Please Remember Me Project is one of the most significant annual events in town.

“All of us know The United States of America is the home of the brave but we all must recognize it is because of the brave and we stand here today to celebrate their service to our country,” he said.