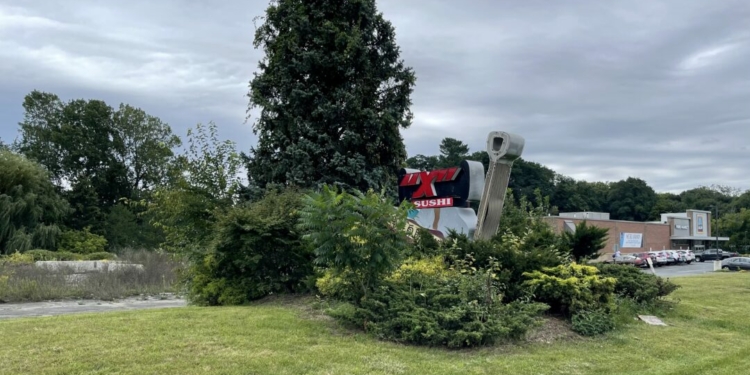 The former Sushi X along Central Avenue will be home to a Popeyes and a bank. (Jim Franco/Spotlight News)

COLONIE — The Planning Board, at its last meeting, unanimously granted final approval for a fast food restaurant, Popeyes, and a yet to be named bank at the former home of Sushi X on Central Avenue.

The former Japanese restaurant, about a quarter mile west of the intersection with Route 155, was demolished in 2019. The original plan for the site was to build a Cumberland Farms.

The 2,145-square-foot restaurant and the 2,500-square-foot financial institution was first proposed in 2021.

The about 2.5-acre plot of land is zoned Commercial Office Residential. It has an easement with the neighboring Aldi’s supermarket to allow traffic through its parking lot to access a signalized intersection, making a left hand turn onto Central Avenue easier and safer.

The Popeyes restaurant will be built on the east side of the property, seat 46 and have two drive thru lanes that would merge into one pick up lane. It would have 25 parking spaces. The bank will have two teller lanes and an automatic teller land and have 39 parking spaces.

Before giving the project a final OK, which clears the way for construction to start, Planning Board Chairman Steven Heider said while the bank has yet to be named, the approval is for a financial institution and the parking and site plan that goes along with such a use. If the developer wants to change the use, to retail for example, the plan will need to come back before the Planning Board.

COLONIE — The Planning Board, by unanimous decision, gave the final OK to a project that will construct three one-story buildings totaling 54,000 square feet on a vacant 10-acre parcel of land at the intersection of Lear Jet Lane and Wade Road.

The plan was presented by Nick Costa, of Advanced Engineering, on behalf of Lear Jet Lane, LLC, a subsidiary of Rosetti Development. The land is owned by Barry Feinman.

The plan was first presented in 2019 and has gone through a number of iterations. It is within the Airport GEIS and the associated mitigation fees associated with this project have been calculated at $144,132, or $2,772 per new vehicle trip.

COLONIE — By unanimous decision, the Planning Board, at its last meeting, granted final approval for a 14-unit subdivision near the intersection of Dunsbach Ferry and Pollock roads.

The subdivision is of a conservation type rather than traditional, which allows for smaller lots but preserves more greenspace. The nearly 10 acres of land is zoned Single Family Residential.

One resident of Dunsbach Road spoke during the public hearing prior to the Planning Board granting approval and basically only inquired about the size of the homes.

The following conditions were attached to the board’s approval: no two identical types of homes or identical colors can be built next other and the landscaping trees will be 2.5 inches rather than 1.5 inches as originally proposed.