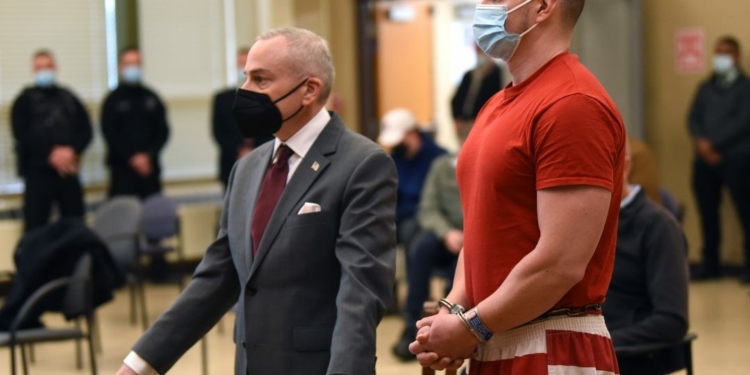 NEW SCOTLAND — Faced with a minimum sentence of 15 years to life for murder, Jacob L. Klein entered a not guilty plea while he was arraigned in Town Court on Thursday afternoon, April 21.

Klein walked into the New Scotland Town Court handcuffed, wearing the county-issued red t-shirt and red and white checkered pants. His cleanly shaven scalp revealed days before in a Virginia mugshot was now showing hints of growth through a dark shadow. He answered just two questions, his plea and whether he received a copy of the felony complaint against him, a charge of second-degree murder that carries a maximum life sentence.

Town Justice David Wukitsch explained that the Class A felony prevented him from setting bail. Klein was remanded to the custody of the Albany County Sheriff. A preliminary hearing has been set for Monday, April 25.

The Cobleskill native is accused of driving from his Virginia home to Albany, where he allegedly stalked New Scotland resident Elana Radin for three days before killing her husband, Philip L. Rabadi on Wednesday, April 13.

“These are very serious allegations,” said New York City defense attorney Mark A. Bederow, pleading with the public to allow due process to proceed before judging his client. He followed by expressing sympathy for the victim’s family. “We feel terrible for the Rabadi family, his wife and family.”

Klein was arrested last Friday, just two days after the 35-year-old Rabadi was found dead in his New Scotland home. A sheriff’s deputy had found him bound and slain in his garage following a welfare check when Rabadi failed to report to work at St. Peter’s Hospital.

Klein, a prior acquaintance of Rabadi’s wife, was quickly named as a person of interest. He was taken into custody shortly after he crossed the border into Virginia Friday evening. He was later arraigned in federal court before returning to Albany.

Radin and Rabadi were married last September. Their home was purchased less than two months before, according to a real estate website. They both worked at St. Peter’s Hospital as physician assistants. Rabadi graduated from Guilderland High School before attending the University at Albany and later completing Albany Medical College’s PA Program.

Klein, who turns 41 next month, is also a physician’s assistant. The Times Union linked a connection with Radin through the SUNY College of Medicine in Brooklyn, from which they both graduated just a year apart.

“I will not comment on motive,” Albany County Sheriff Craig Apple said on Saturday, “but we have a very good chronological breakdown of when he was up here, what he was doing up here, and where he was.”

Some of the information gathered during the investigation included obtained footage captured on neighbors’ doorbell cameras around Rabadi and Radin’s home.

Bederow said he had not yet reviewed evidence from the case and was only familiar with the details shared through recent news coverage. He said he anticipates receiving more information from the prosecution’s discovery within the coming weeks, some of which will be revealed at Monday’s preliminary hearing. He warned reporters after the arraignment hearing to not be swayed by what has been previously shared through press conferences and statements.

“I would just caution the public to presume innocence as anyone is entitled to, and wait for the details to come from the courtroom and not through press conferences and releases from the police officers,” he said.