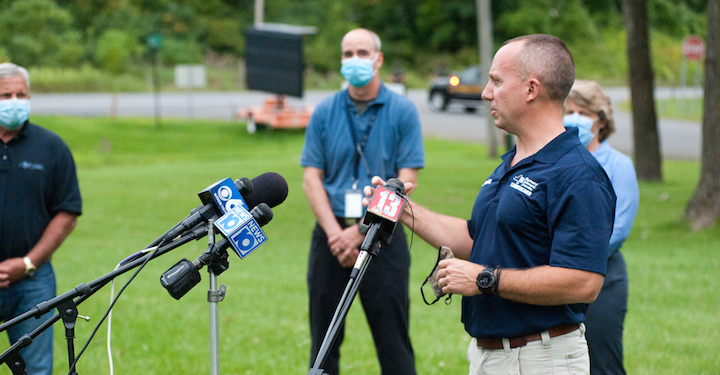 SELKIRK — New York state Department of Environmental Conservation announced two orders on consent with SABIC, including $322,400 in penalties, enforcing violations stemming from the September 2020 incident that resulted in the release of approximately 22,057 pounds of styrene vapor.

“Today, DEC is holding SABIC accountable for creating a dangerous situation that threatened the health and safety of employees, emergency responders, and the surrounding community,” Commissioner Basil Seggos said on Wednesday, April 13, “These enforcement actions include a substantial penalty and require SABIC to improve its operations to protect the surrounding community and the environment from further violations and prevent future emergencies.”

DEC’s investigation of the incident revealed improper handling and storage of hazardous substances, improper maintenance and repair of the railcar, violations of air pollution regulations, and an unauthorized release of a hazardous substance. In addition, DEC’s inspection found an additional 29 violations of the facility’s Air Title V permit, unrelated to the styrene release.

The two orders on consent address all violations from the styrene release event, as well as the additional air permit violations. In addition to the penalties imposed and to help prevent future incidents, DEC’s orders on consent require SABIC to undertake a comprehensive third-party audit of the facility’s hazardous substance management and to develop recommendations for DEC staff review, and to develop new operating procedures and employee training protocols.

Several emergency response agencies scrambled to the plastics facility on Sept. 1, 2020 to address a railcar leaking vapor. According to a DEC spokesperson at the time, an exothermic reaction of the styrene monomer compound was elevating the temperature in the storage tank, threatening an explosion. When Seggos arrived later that day to address the press, he said he could smell the vapor once he stepped outside of his home residence in New Scotland.

Multiple road closures, a shelter-in-place order for the public within a mile radius, and a public evacuation order within one-half mile of the facility were ordered. Emergency responders, including the New York State Office of Emergency Management, State Police, State Office of Fire Prevention and Control, and local governmental agencies, responded to the facility.

In a notice of violation addressed to SABIC officials three weeks later, the state Department of Environmental Conservation stated the plant’s failure to follow its own procedures led to gas leak. The notice confirmed that the tank car responsible for the leak of styrene monomer was at the Selkirk plant since May 26. On that same day, SABIC personnel observed a frozen valve on the tank car, preventing them from unloading the monomer. It was then moved to the facility’s railyard where it allegedly sat unmonitored for more than three months.

“SABIC’s failure to properly store and monitor the unloaded tank car shipment resulted in the unauthorized styrene release which caused odor impacts throughout the nearby community,” DEC Regional Engineer Victoria Schmitt stated in her notice.

Early photographs from Albany County Sheriffs showed the railcar hitched to several more tankers as firefighters doused it with water in their effort to cool it down. A picture later shared by the Town of Bethlehem revealed a temperature that placed the monomer well beyond its flashpoint, which would cause the liquid to form an explosive vapor.