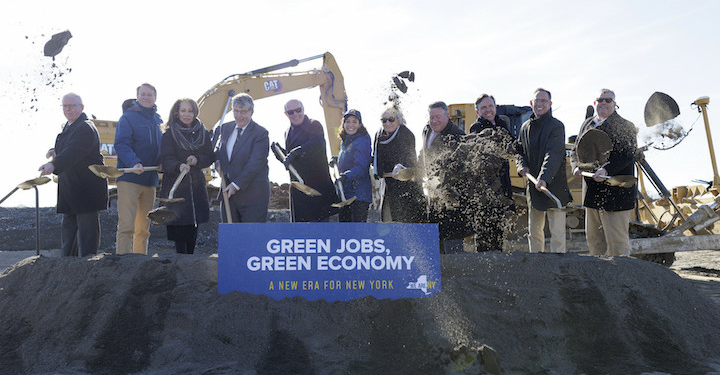 SLINGERLANDS — Gov. Kathy Hochul was in town Tuesday, March 8 for a groundbreaking ceremony ushing in Plug Power’s newest manufacturing facility to be completed at the Vista Technology Campus in Slingerlands.

Additionally, the company has committed to creating 1,633 new jobs, and retaining another 701 jobs in Albany County, to support its new green energy production needs. Empire State Development has agreed to provide up to $45 million in performance-based Green Excelsior Jobs Tax Credits to encourage the creation and retention of green jobs. In addition, the New York Power Authority (NYPA) Board of Trustees will review a power allocation award from NYPA’s low-cost ReCharge NY power program at its public meeting later this month.

“My administration is committed to the aggressive pursuit of economic development opportunities that align with our nation-leading clean energy goals,” Gov. Hochul said. “Our transition to clean energy won’t just help us respond to climate change and lower utility costs, it will supercharge our economic recovery and create good jobs. We are grateful to have Plug Power as a partner in our mission to become the nation’s hub for green energy development.”

Founded in 1997 in Albany County, Plug Power created the first commercially viable market for hydrogen fuel cell technology, and as a result, has deployed over 38,000 fuel cell systems for e-mobility – more than any company in the world – and has become the largest buyer of liquid hydrogen, having built and operated a hydrogen highway across North America. Plug Power announced a partnership earlier this year with SK Group, one of the leading South Korean business groups, to accelerate hydrogen as an alternative energy source in Asian markets. Through this partnership, both companies intend to provide hydrogen fuel cell systems, hydrogen fueling stations, and electrolyzers to the Korean and broader Asian markets. Plug Power is also partnering with Europe’s second-largest automaker Renault Group of France to produce fuel cell-powered commercial trucks.

The project in Slingerlands is just one example of how the Latham-based company has been aggressively expanding in recent years. Plug Power recently opened its $125 million hydrogen fuel cell innovation center in Monroe County that will create 380 jobs, and has also begun construction on a $290 million, state-of-the-art, green hydrogen fuel production facility and electricity substation at the Western New York Science, Technology and Advanced Manufacturing Park in Genesee County. The company, the first tenant at the manufacturing park, is also funding the construction of a 450-megawatt electricity substation on site that will support its hydrogen projection facility and future growth opportunities at STAMP.

The governor said Plug Power’s new footprint in Slingerlands complements the importance to New York State’s comprehensive decarbonization strategy. In her 2022 State of the State, she announced that the State will undertake several direct actions to support the development of green hydrogen and invest in communities, including pursuing federal funding to create a green hydrogen hub and combining production and consumption focused activities into a single vision for decarbonization. It also marks the second large-scale project to be introduced within the town of Bethlehem.

“The future is green, and the green future is right here in Bethlehem,” said Bethlehem Town Supervisor David VanLuven. “Our planning and engineering teams worked closely with the Town of New Scotland, Albany County, and Plug Power’s representatives to move the project quickly and efficiently from concept to construction. The project is a testament to Bethlehem’s business-friendly approach and commitment to clean energy, and we expect it to be just the beginning of more green businesses to come.”