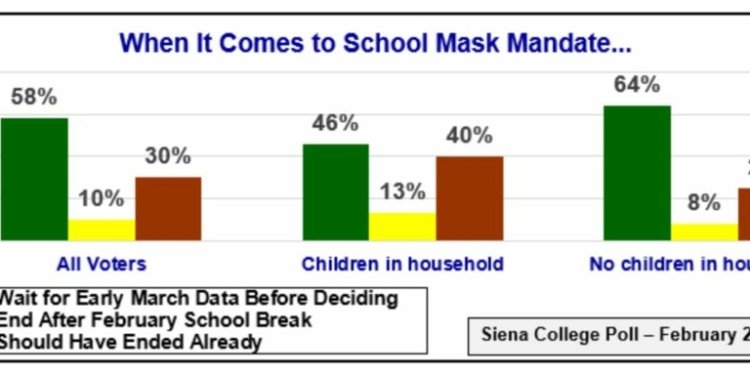 LOUDONVILLE — The majority of New Yorkers, 58 percent, say the state should wait until data is analyzed in early March before deciding whether to lift the mask mandate in schools. Thirty percent say it should have already been lifted, and 10 percent say it should end at the end of this week, when students return from break, according to a poll by the Siena College Research Institute.

“Waiting to see data from early March before deciding to lift the school mask mandate – as opposed to lifting that mandate as schools reconvene next week or wishing it had been lifted previously – is how the majority of New Yorkers would like to proceed,” said Siena College pollster Steven Greenberg. “The majority of virtually every demographic group agrees, though not Republicans and conservatives, who wish the mandate had ended already.”

“While nearly two-thirds of voters without children at home support waiting for March data to decide on the school mask mandate, state and school officials face a ‘lose/lose’ proposition with their constituents most closely affected by this decision – regardless of the decision – since voters with children under 18 in their household are closely divided between waiting for data to decide and masks should have been off already,” Greenberg said.

Overall, 57 percent say they are very or somewhat concerned about being a victim of a crime while about half of upstaters, whites and those in the downstate suburbs are concerned they will be a victim. Nearly three quarters, 71 percent, of New York City voters and about two thirds of blacks and Latino voters are concerned with becoming a crime victim, according to the poll.

Sixty-five percent of all voters think 2019 “bail reform” legislation should be amended to give judges more discretion to “keep dangerous criminals off the streets.” Twenty-seven percent say it should not be amended because “it could once again lead to people of color being disproportionately denied bail.”

Hochul, the official Democratic Party pick for governor, is in a comfortable lead with 46 percent of the Democrats saying they will vote for her in the primary later this year. According to the poll, 17 percent would support New York City Public Advocate Jumaane Williams and 9 percent would support U.S. Rep. Tom Suozzi with more than 25 percent undecided.

“While Williams has a narrow 39-32 percent lead over Hochul with Black voters and he’s within three points of Hochul with younger voters, Hochul has a large to commanding lead with virtually all other demographic groups, with large double-digit leads in every region,” Greenberg said.

The governor, elevated to the position in August, 2021 to replace Andrew Cuomo, who resigned amongst allegations he sexually abused as many as 11 women in state employ and other alleged ethical transgressions, has a 46 percent favorability rating opposed to 32 percent who view her unfavorably. Twenty-two percent do not have an opinion.

Fifty-nine percent of voters do not know enough about Williams to form an opinion and 66 percent feel the same about Suozzi.

A large majority of voters, 58-21 percent, think he did sexually harass multiple women, which is little changed from the 58-21 percent who thought so in September, 2021.

Despite a number of district attorneys across the state refusing to bring formal, criminal charges against Cuomo the majority of New Yorkers, 56-25 percent, do not think he is vindicated.

By a 47-27 percent margin, voters say they believe Attorney General Letitia James, who says Cuomo is a “serial sexual harasser,” more than they believe Cuomo, who says the investigation against him was a “political hit job.”

And, by 80-13 percent margin, voters say Cuomo made the right decision to resign.

“New Yorkers are not ready to forgive and forget when it comes to Cuomo. By two-to-one, they view him unfavorably. By more than two-to-one, voters say both that he has committed sexual harassment against multiple women, and, despite there being no criminal charges, he has not been vindicated,” Greenberg said. “

Nearly 80 percent of New Yorkers think inflation has a very or somewhat serious impact on their personal finances.

This Siena College Poll was conducted February 14-17 among 803 New York state registered voters. It has an overall margin of error of +/- 3.9 percentage points.