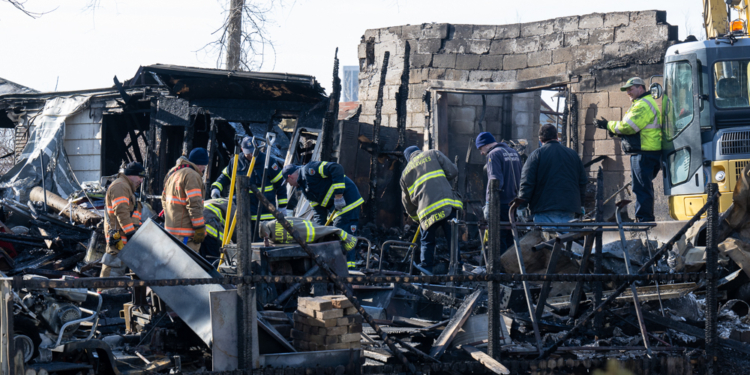 COLONIE — Fire investigators were combing through the wreckage on Monday, Feb. 21, trying to determine what caused a blaze that hours before destroyed three buildings on Spruce Street and did heavy damage to a fourth.

Fuller Road Chief Mike Romano said the call came in at about 1:40 a.m. about a structure fire at a welding shop located at 20 Spruce St. that included reports of explosions. Upon arrival the shop at the end of a dead end street off Fuller Road was heavily involved. The explosions, he said, were likely from between 25 and 30 propane tanks — of all sizes from 25 to 100 gallons — stored on the site.

There were no injuries to the homeowner or the neighbors or first responders, he said.

“A business, a welding/repair businesses, was heavily involved and two garages were involved and we had one house involved,” he said at the scene on Monday. “We are digging it all apart trying to find out what happened.”

At least nine fire departments and about 100 firefighters fought the blaze for two hours before getting it under control, Romano said.

And an already difficult situation was made more so by a large water main break that buckled Spruce Street about 10 minutes after firefighters began dousing the fire. It cut off the firefighters’ water source and lines had to be stretched 1,500 feet to Fuller Road before they could continue battling the blaze.

Also, he said, live power lines fell on either side of the welding shop further hampering firefighters’ efforts.

“We had a lot of things going against us this morning,” he said. “At the end of the day, nobody got hurt and that’s what I was just telling the homeowner. We can all walk away and worry about the small stuff later.”

The house directly next door to the welding shop was heavily damaged during the blaze and it remains to be seen if it can be rebuilt or if it will have to be torn down.

The resident, Gerard Mangan, said he was awoken by a loud noise and saw a large orange light outside his bedroom window. He opened the shades, saw the blaze and called 911 as he got himself and his girlfriend out of the house as quickly as possible.

“I think I had about 10 minutes to spare,” he said while standing across Spruce Street from his house. “If it had been 10 minutes longer I don’t think I would be here talking to you.”

He and his girlfriend have found a place to stay while they determine what to do with his home.

The neighbor living across Spruce Street said he was sleeping when the explosions woke him up.

The property across the street was littered with old automobiles and small engines. The home out front received minor damage.

In addition to firefighters with the Fuller Road and other fire departments, Town of Colonie and New York State fire investigators, National Grid was on the scene to secure the power lines on the normally quiet, residential street.

The state Department of Environmental Conservation was also on the site assessing how much fuel and other contaminates leached into the earth and Town of Colonie crews were digging up Spruce Street to fix the broken water main.