No Result
View All Result
Home News Spotlight On Business

Spotlight on Business 2022: Garden Bistro’s 24 has a Farm-to-Table menu that promises a feast for the senses 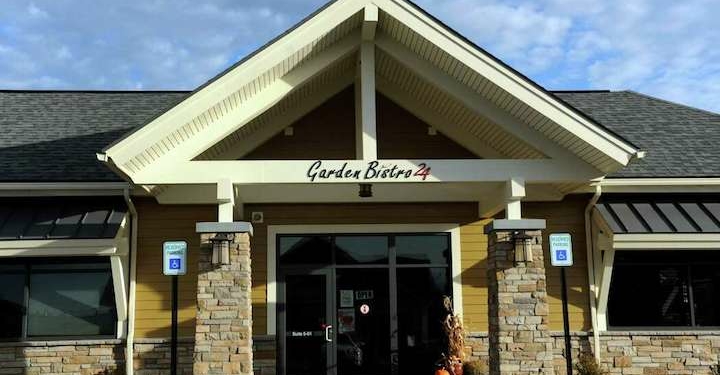 SLINGERLANDS — Speak to John Grizzaffi about food and taste won’t be the first sense he references, neither will it be the second.

It’s a conversation the chef often has when people ask him to describe the contrasts between everyday food and his Farm-to-Table menu at Garden Bistro 24. The difference, he said, is first detected by the eyes and the nose.

“There’s a lot more aroma, identifiable aromas to certain things,” he said, explaining how herbs and berries enhance the flavor of a dish instead of other staples people are used to in processed foods. “I think a lot of the aromas are lost in transport. When you turn around, aromas are what follows next after sight, and I think it just makes a major difference.”

Grizzaffi opened Garden Bistro 24 as the first eatery in Slingerlands’ Vista Technology Campus nearly a decade ago with his father, Charles.

Grizzaffi is a graduate of the prestigious Culinary Institute of America in Hyde Park. Known for its food focus and world-class resources, the college is renowned for offering degrees in applied food studies, culinary science, food business and hospitality management. His kitchen is devoid of microwaves and freezers.

Grizzaffi curates fresh food from a dozen different farms, all of whom are listed on the restaurant’s website. Outside of the fish made available along the East Coast, meat and vegetables are obtained from farms within the Capital District.

For Grizzaffi, there’s nothing fancy about his restaurant. The food is welcoming and authentic, and it brings kids to the table. And, if it’s to be a night without the kids, venture on to Garden Bistro’s heated patio for a chicken pot pie, a craft beer or some wine.

“We hate the word ‘fancy,’” he said. “When I was a kid, a nice restaurant had to be considered a fancy restaurant. As an adult, absolutely not. I don’t crave fancy food. … A great restaurant is a simple restaurant; and that is, to provide a great environment and food.”

Garden Bistro 24 opened its doors as the first eatery in Slingerlands’ Vista Technology Campus nearly a decade ago. He opened it with his father, Charles, in 2013 as a casual restaurant with French influence. Over the years, patrons have recognized it as a place they can go to shrug off cooking dinner, throw on sandals and a pair of jeans, and grab either a signature crab cake, burger or something else off the seasonal menu.

Spotlight on Business 2022: National Bank of Coxsackie invests in its neighbors