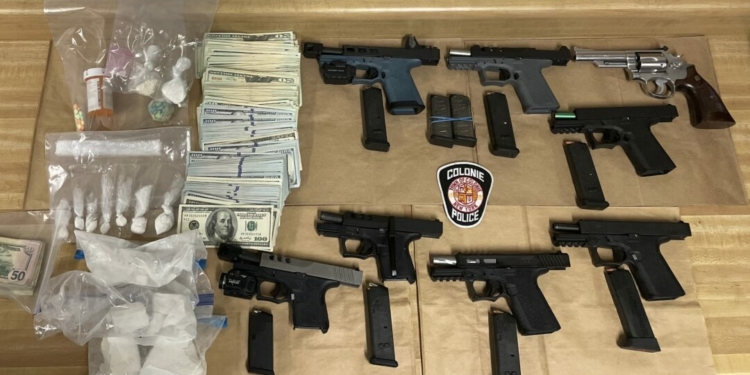 According to Lt. Daniel Belles, police responded to the area of Cramond and Barthol streets for a report of an individual pointing a gun at another person during a brief encounter.

Police located John Jaffarian, 38, of Colonie, driving a vehicle on Cramond Street and pulled him over. A subsequent search revealed a 9mm “ghost” gun in his waistband as well as the drugs of  cocaine and ecstasy.

A subsequent search of his residence at 25 Cramond St. revealed six additional “ghost” 9mm handguns and a .357 revolver, a large quantity of cocaine, marijuana and other controlled substances and more than $19,000 in cash.

Two other people were in the home at the time and arrested: Ian Bohen, 37, of Colonie, and Angelica Mandl, 36, of Mahopac.

All three were arraigned in the Town of Colonie Justice Court and were remanded to the custody of the Albany County jail pending future court appearances.

The investigation is ongoing. Anyone who knows information relevant to it is asked to call Colonie police at 518-783-2754. Anonymous tips can be given by calling Capital Region Crimestoppers at 1-833-ALB-TIPS, or go to capitalregioncrimestoppers.com.

A fusion of flavors for the big game