Bethlehem police put a name to their John Doe 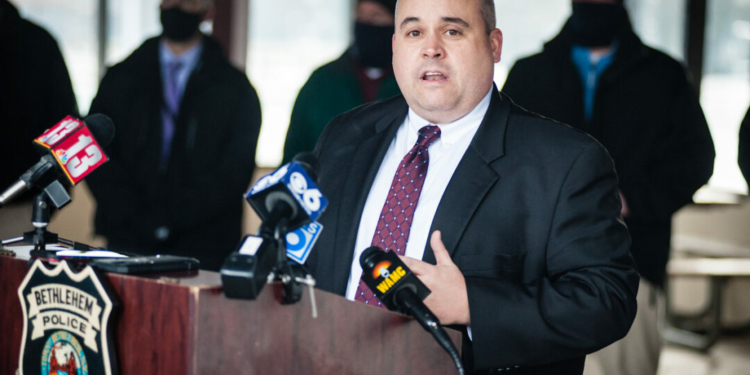 SELKIRK — Franklin Feldman was the talk of the town as residents speculated over the details of this community’s 41-year-old mystery — just nobody knew him by name.

Today, Thursday, Jan. 13, Bethlehem police affixed Feldman’s name to the department’s long-standing cold case: identifying him as the man whose body was found in the wooded area of Frank Vadney’s farm in the early spring of 1981.

“Cold cases are unique,” said Bethlehem Police Chief Gina Cocchiara. “While sometimes they appear to be forgotten about, they’re always being worked on so we can find closure for all those who are involved.

“I think that’s paramount to this.”

A flock of reporters gathered around a small cadre of law enforcement officers at the Elm Avenue Town Park where a press conference was scheduled. The police agency alluded to the breakthrough in a statement the day before. Feldman’s body was found within yards of where nature trails meander through the woods in the back of the park expansive complex.

Feldman was identified through the use of Investigative Genetic Genealogy, the same forensic pathology used to identify the Golden State Killer in 2018. Genetic material extracted from a jawbone helped locate two relatives, a first cousin and aunt, through familial DNA databases.

It is the first case solved within the Capital District by using the technology.

“We can prove, based on all testimony and physical evidence today, the confirmed two DNA samples on the body found on April 3rd, 1981, buried in Graceland Cemetery a couple of days later, is no longer John Doe,” said Bethlehem Police Cmdr. Adam Hornick. “But is, in fact, Franklin Feldman.”

Hornick has been the lead investigator on the case since the agency began rebuilding it in 2013. That was when the department’s administrative sergeant presented him with only two sheets of notes. Evidence gathered from the site in 1981 was since suspected lost following a flood in the town hall’s basement in the 1990s.

Early in the original investigation, Bethlehem police left a jawbone to Dr. Alan Rosell, a Saratoga County dentist, in an attempt to learn Feldman’s identity. However, the mandible was never retrieved back. It was rediscovered in 2017 following a review of the case notes that referenced it. Though Rosell retired a decade before, his practice remained in business, and those who remained in the office were familiar with the evidence.

The returned jawbone allowed the case to proceed. Bethlehem police reviewed the bones with a New York State Police forensic odontologist and confirmed a match to the dental chart from the case’s paperwork. It was then sent out to establish a DNA profile through work with the New York City Office of Chief Medical Examiner and the University of North Texas Center for Human Identification.

Investigative Genetic Genealogy is an emerging process thanks in part to the popularity of genealogy databases such as GEDMatch and FamilyTreeDNA. The technology led to the 2018 arrest and ultimate conviction of Joseph James DeAngelo Jr., otherwise known as the Golden State Killer.

After obtaining a DNA profile, Bethlehem police received approval from the Albany County District Attorney’s office to submit it for a familial search against both national and state databases. However, the use of investigative genetic genealogy is not allowed in every state. Up until recently, New York state did not permit it in cases such as this. Hornick proceeded with a media push in 2019, attempting to pressure for its use. In a 40-year-old case, he said he was afraid opportunity would disappear.

The state’s familial search laws were changed as a result of Bethlehem’s case to identify its John Doe. Feldman’s DNA profile was submitted to an FBI office at Melville in 2020. With Othram Inc., a Texas-based corporation specializing in forensic genealogy, developed a genealogical profile and generated a lead of potential family members: a first cousin who had never met Feldman, and an aunt described in her late 80s and in declining health.

“When we made the media push a couple of years ago, we referenced to the fact that if the case isn’t solved in the next few years, the likelihood of it being solved is low,” Hornick said. “We can stand here and say that is definitively true.”

In life, Feldman was described as estranged from the rest of his family. He would contact them sporadically while living in various places throughout the state — sometimes homeless. The police commander described him as being in and out of hospitals, suffering through “mental concerns.” He was found with a CDTA bus ticket, copies of two local weekly newspapers and a notebook listing addresses of local churches and soup kitchens. He wore a fur-lined coat with moccasin-style loafers. The date on each of the newspapers was Jan. 1, 1981. Police suspected he died soon after. No cause of death was determined, and police said there was no evidence suggesting foul play.

The Feldman case and the charge it generated to change state familial DNA laws is expected to help more agencies trying to close similar cases.

Hornick, a New Scotland native and graduate of Bethlehem Central, admitted to having mixed emotions while closing the case. He placed its timeline in context with everyone in the audience. How it dated farther back than everyone’s career within the agency, and that longtime residents could remember back to their childhood, knowing about the case but never learning who it was.

“I’m glad to be a part of this team that was able to get this case solved,” he said. “Not only for the family but for the community.”

Read the original story about the John Doe case as reported by Spotlight reporter Diego Cagara.