POLL: Cost of gas and food a growing concern 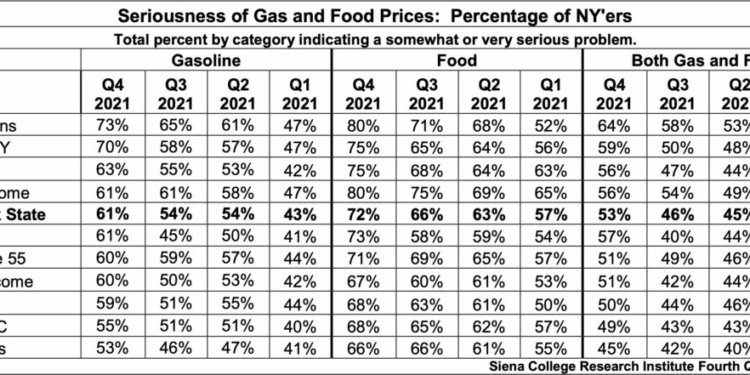 LOUDONVILLE — The cost of gas and food are had a very serious or somewhat serious impact on the finances on more New Yorkers in the fourth quarter last year than the third quarter, according to a poll of Consumer Sentiment by the Siena College Research Institute.

Meanwhile, the state Index of Consumer Sentiment is up 1.2 points to 73.1, according to the poll, that is 5.7 points higher than the nation’s index of 67.4.

“After a precipitous fall in sentiment rose by a point as New Yorkers balance an ongoing decline in their current economic situation with an uptick in their long-range outlook,” said Don Levy, SCRI director. “Most noteworthy are concerns over the bite that gas and food are taking out of the budget as inflation has generated concerns over gasoline prices that we haven’t seen since March of 2013 and food price worries not matched since July of 2011.”

Concerns over the prices of gas and food are felt more strongly across the board — by both political parties, by men and women and by all income levels — but is being felt especially hard by upstaters, women and older residents, according to the poll.

The current index in New York is 3 percentage points below the threshold where optimism and pessimism balance, which is about the same as when the pandemic took hold in March, 2020, Levy said. Looking ahead, it is 3.9 percentage points higher in this state. Nationally, the current sentiment is 6.5 points below the threshold and the future outlook is 4.6 points lower.

“Only faith in a better tomorrow which rose to equal where we stood a year ago resulted in the one-point overall index increase,” Levy said.

The poll was conducted from Nov. 8 to Nov. 16 by making random phone calls to 395 New Yorkers. It has a margin of error of +/- 3.8 percent. The consumer sentiment analysis is generated as an index number and margin of error does not apply.