Is that thunder in the sky? 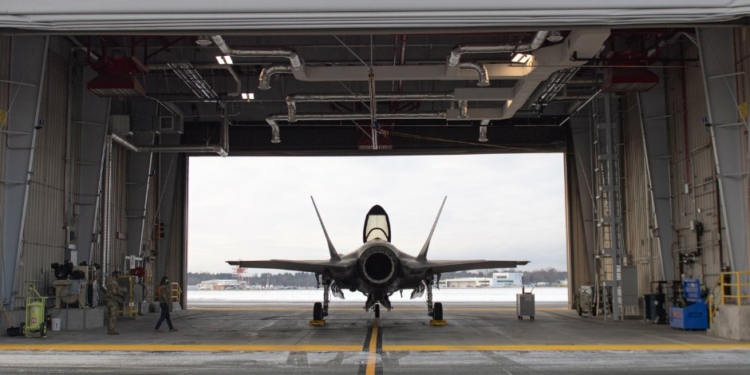 An F35 sits in a hangar at the Burlington Air National Guard Base in South Burlington, Vermont on Monday, Jan. 3. as it prepares to take off for its 4,000th flight since the air base’s transition to the F-35. Photo Credit: Vermont Air National Guard

ALBANY COUNTY — The loud, mysterious rumble local residents heard from the skies on Thursday afternoon was from training missions by the Vermont Air National Guard.

The 158th Fighter Wing unit out of the Burlington Air National Guard Base in Vermont has been conducting training missions of the F35 Lightning military jet. According to a statement from Col. Daniel Finnegan, 158th Fighter Wing vice commander, the unit started nighttime takeoffs on Tuesday, Jan. 4 in addition to afternoon takeoff and landings.

“An important part of our ability to complete both our state and federal missions is the ability to work in all conditions with the expertise that our nation expects and deserves,” said Col. Daniel Finnegan, 158th Fighter Wing vice commander.

Capital District residents are familiar with the sound of roaring jets as they fly to and from Albany International Airport in Colonie. However, the uniform flight patterns of commercial jetliners provide a sense of familiarity that made Thursday afternoon’s rumbles feel out of place.

“I was at the hair salon in Guilderland,” Peggy Rising shared online. “I was frozen to the chair, scared to death. I didn’t know if I was going to get my hair cut or have it blown off.”

Both the Albany International Airport and the U.S. Bureau of Transportation capture data to record noise produced by air traffic. Residents who live near the airport — even those just north of the Mohawk River in Clifton Park — can commonly hear the roar of jet engines. The 2014 Noise Exposure Map, which resembles a typography map, confirms a t-cross pattern quantifying the impact air traffic noise has on surrounding communities. Residents wondering about the mysterious rumble were outside of the map.

According to social media posts, the engine roars were heard throughout the Capital District, including Thacher Park, Ravena and New Baltimore.

The Vermont Air National Guard was federally recognized in August of 1946 with the 134th Fighter Squadron. Known also as the Green Mountain Boys, the unit began its first flying mission with the F-47 and historically became the first Air National Guard unit to base the F-35A Lightning II, the most advanced and capable weapon system in the U.S. Air Force, in September 2019.

According to its website, the Vermont Air National Guard has roots as a small militia led by Ethan Allen in 1775. Today, the all-volunteer force continues to serve Vermont and combatant commanders around the world. Most notably, the unit delivered support to the state with the ongoing COVID-19 pandemic, provided emergency response efforts during Tropical Storm Irene and flew F-16 jets over New York within hours after the 9/11 attacks.