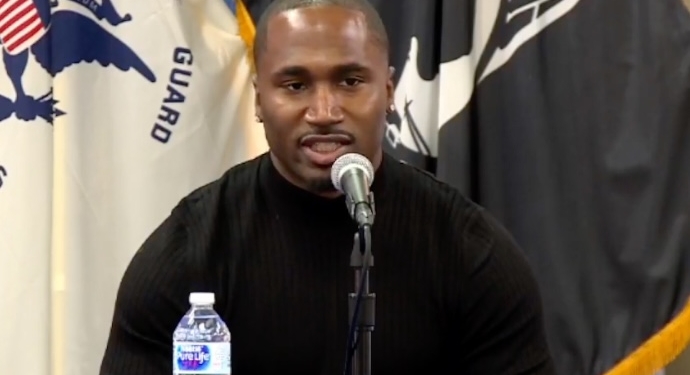 A screen shot of Dion Lewis during an Albany County press conference on Nov. 24.

GUILDERLAND — Dion Lewis, a former NFL running back recently hired as the Albany County community health and wellness development coordinator, was arrested for DWI on Sunday, Dec. 19, after getting pulled over for vehicle and traffic violations.

According to Guilderland Deputy Police Chief Curtis Cox, officers pulled Lewis over on Western Avenue near the intersection with Church Road a few minutes after midnight.

He was charged with that along with the infractions of improper/unsafe turn signal, making an unsafe right turn and the misdemeanor of first offense DWI.

“Dion has informed us of the incident,” said Mary Rozak, spokeswoman for County Executive Dan McCoy. “He continues to work as a committed ambassador on promoting Covid-19 vaccinations in our communities and programs and services offered by the County. We respect the legal system and will not comment further until the process is complete.”

On Nov. 24, McCoy announced he was hiring Lewis, who grew up in Albany County, to build “trust with residents and connecting them with services Albany County” has to offer.

“We have a great opportunity because Dion is a role model, especially with young men, and one of the lessons we learned over the last 22 months dealing with COVID is that some people can be skeptical of government,” McCoy said at the time. “Dion’s a credible messenger and will be able to help us break through those barriers.”

Lewis, a standout at Albany Academy, played 10 years in the NFL, winning a Super Bowl in 2017 with the New England Patriots.

It is not the first time he ran into problems with police. In 2012, Lewis and his brother were charged with doing damage to the Hampton Inn on Chapel Street and then pulling a fire alarm. Falsely reporting a fire is a felony.

He is due in Guilderland Town Court on Jan. 6, Cox said.

Plug Power clears first hurdle with Zoning Board of Appeals