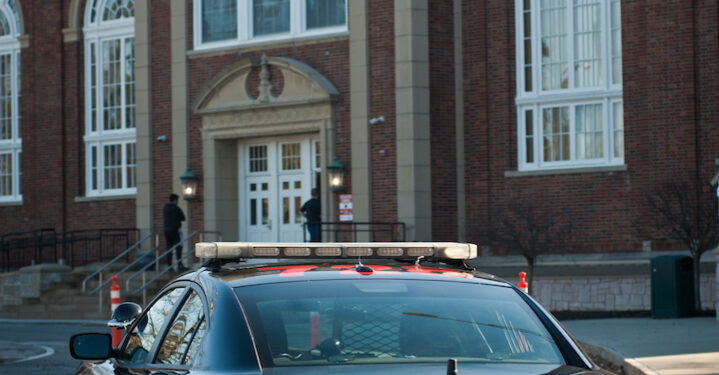 DELMAR — Local law enforcement was visible across town and local schools on a day in which anonymous social media posts called for nationwide violence on Friday, Dec. 17.

The day before, emails from local school officials were accompanied by separate messages from law enforcement agencies alerting families that they were working together to ensure safety within their respective school communities.

The latest challenge implied violence at schools, including elementary. The Bethlehem Police Department issued a statement to clarify no threats were directed towards any area school, but that its officers would be involved to ensure safety within the community. On Friday, two patrol cars were stationed within the heart of town at the Bethlehem Central Middle School parking lot.

Bethlehem Police Cmdr. James Rexford explained that the agency continued to put an operational plan though there was no credible threat.

“Today was all about making our school community feel safe,” he shared in a statement to The Spotlight. “It has truly been a team approach. Our communication staff has been monitoring our tip line, our detectives have been working with school officials on operational planning, our patrol division has been following up on calls from the tip line and they have been highly visible at all our school buildings today.”

Social media posts have recently challenged school children to perform acts of vandalism at school. Similar challenges have dared them to record themselves or record others as they break and damage school property and share on platforms like TikTok.

There were no reports of violence in Bethlehem on Friday, but other school districts reported a few disruptions. In Schenectady, a school went into lockdown after a perceived threat was reported on social media. Across the Hudson River, school administrators in the Averill Park Central School District closed their buildings after a reported threat was directed toward their schools.

“If anything, the value of our partnership with the Bethlehem Police Department really showed today,” stated JoEllen Gardner of Bethlehem Central School District.

Superintendents across the Capital District had shared messages stating that their respective schools would add extra security while assuring families there was no “credible threat” to the schools.

“The origin of these posts is unknown, however, this appears to be the latest entry in a troubling trend of “challenges” that have been discussed extensively on TikTok,” stated Jody Monroe, Bethlehem Central superintendent. “Earlier this year, schools across the country saw an increase in incidents of vandalism and, in some cases, violence related to these TikTok challenges that included the ‘Devious Licks’ challenge and the ‘Slap Your Teacher’ challenge.”

Bethlehem police encouraged the public to adhere to the “See Something, Say Something” philosophy. In November, Bethlehem police were alerted by the public of online threats posted by a high school student. The student was later arrested and charged for making a threat to members of the school community.

“We want to be very clear, a specific threat has not been made against any of our RCS schools, staff, or students. This is a generalized threat that has been circulating around the state and country and we just want you to be aware,” stated Ravena Coeymans Selkirk Superintendent Brian Bailey.

Residents in Colonie are encouraged to call Colonie Police at 518-783-2811 for suspicious activity. The Bethlehem Police Department maintains a confidential tip line at 518-439-1503 for use by district students, parents, faculty, staff and families. The phone line is a provided resource for reporting dangerous behavior, including self-harm, or harm to others, threatening statements or online chatter, actions that are out of the ordinary or statements that are out of the ordinary.