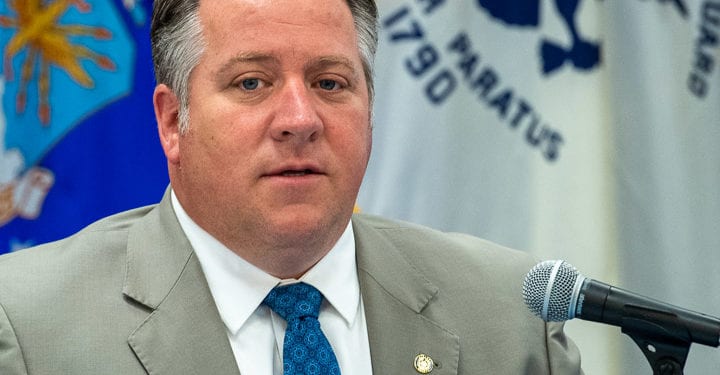 ALABNY — The COVID-19 numbers over the past month are worse than a year ago, and if that trend continues through the Thanksgiving holiday, a mask and other mandates could come back into play, said County Executive Dan McCoy on Wednesday, Nov. 24.

Vaccinations were not available to the general public until April, 2021.

“The million dollar question is why are or numbers worse than a year ago when we didn’t have the vaccine,” he said. “We said If you vaccinate you don’t have to wear a mask if everyone in the room was vaccinated. Just walk around. Go into any store. Nobody is wearing a mask. I get it. Nobody wants to wear the mask, nobody wants to read about it anymore. Nobody cares. But there are still people dying and still people getting sick and there are people who have it and don’t realize it and transmit it to someone else.”

Numerous times through his 40-minute briefing where he introduced former NFL player Dion Lewis as the county’s new Community Health Wellness Coordinator, he urged people to get vaccinated and said the unvaccinated are more likely to get sicker, more likely to die and more likely to not take precautions, like wearing masks, and are the reason the virus continues to spread.

“I don’t want to implement stuff that is going down in New York City, with mask mandates and people having to show their vaccination card to go into a restaurant,” McCoy said during his first press briefing in a month. “Go into any corner store and nobody is wearing a mask. Maybe one person.”

He said he would look at the numbers after Thanksgiving and is expecting a spike. How large the spike will dictate whether or not he mandates masks. A decision is expected next week, he said.

“We know the infections rate will increase after Thanksgiving and we are on a pace to crush our numbers last year,” he said. “We can’t stick our heads in the sand. In January of this year we had 89 deaths in Albany County and I’m afraid it will happen again.”

The press briefing comes at a time when Glens Falls Hospital announced it was past capacity and that this “COVID spike is much worse than any other.”

“Let me be blunt, said Dr. Howard Fritz, chief medical officer at Glens Falls Hospital in a press release posted on the Warren County Facebook page. “If you are not vaccinated, get the vaccine immediately. If you are eligible for the booster, get it. Your life, your loved one’s lives, and those of your friends and neighbors depend on it.”

He said, in the statement issued by Glens Falls Hospital, Hudson Headwaters Health Network and the Irongate Family Practice, there are more than 50 people admitted with COVID and the “vast majority” are not vaccinated.

Dr. Dennis McKenna, president of Albany Medical Center Hospital, said the influx of COVID-19 patients is “under control” but, during an interview on Talk 1300, added most of the patients are not vaccinated and all those in the ICU have no gotten the shot.

The infection rate in Albany County is at 5 percent. McCoy said last year the threshold to opening things back up was 4 percent. He added the way the state looks at data has changed and rather than infection rate, hospitalization rate is the determining factor.

“We would be shut down at 5 percent. Remember. We could not get movie theaters open,” he said. “I am not going to advocate shutting down again. But I will probably mandate masks all over the county again like they did in Erie County. I don’t want to do that. I am pleading with people to do the right thing.”

He said he would rather have a regional approach to any COVID-19 mandates and has been in discussions with Gov. Kathy Hochul. There are eight counties in the Capital District Region with a combined 6.8 percent seven-day infection rate. Albany County’s seven-day infection rate of 5 percent is the lowest. Washington County is the highest with 12.4 and Warren County’s is 8.9 percent. The seven-day average in Rensselaer and Columbia counties is 5.9 percent.

Statewide the seven-day infection rate is 3.8 percent with New York City being the lowest at 1.7 percent and Western New York being the highest with 9.7 percent.

Testing, too, remains an issue, McCoy said. Last year testing was free and the county was doing some 2,000 a day. Now it costs $125 per test, and there are maybe 200 a day and still the numbers are spiking.

“With the number of tests we are doing and the infections we are seeing, I have to believe (the infection rate) is a lot higher now,” he said.

Meanwhile, from Tuesday to Wednesday, a man in his 60s died of COVID brining the county death toll to 240.

There were 41 county residents hospitalized with four in the ICU.

As of Tuesday, 75 percent of all Albany County residents have received at least the first dose of the vaccine, and 67.5 percent have been fully vaccinated. The first dose vaccination rate for the county’s 18 and older population is now up to 84.6 percent.

Lewis, a running back, grew up in the South End of Albany and played 20 years in the NFL. He won a Super Bowl championship with the New England Patriots.

“I’m grateful to be in this position and be able to give back to the community I was raised in,” he said. “I’m from here and if I can do something positive anyone can. I am no one special. I was a little lucky and raised buy great parents in a great city. This is home. No matter where I have been or what I did in life this is home.”