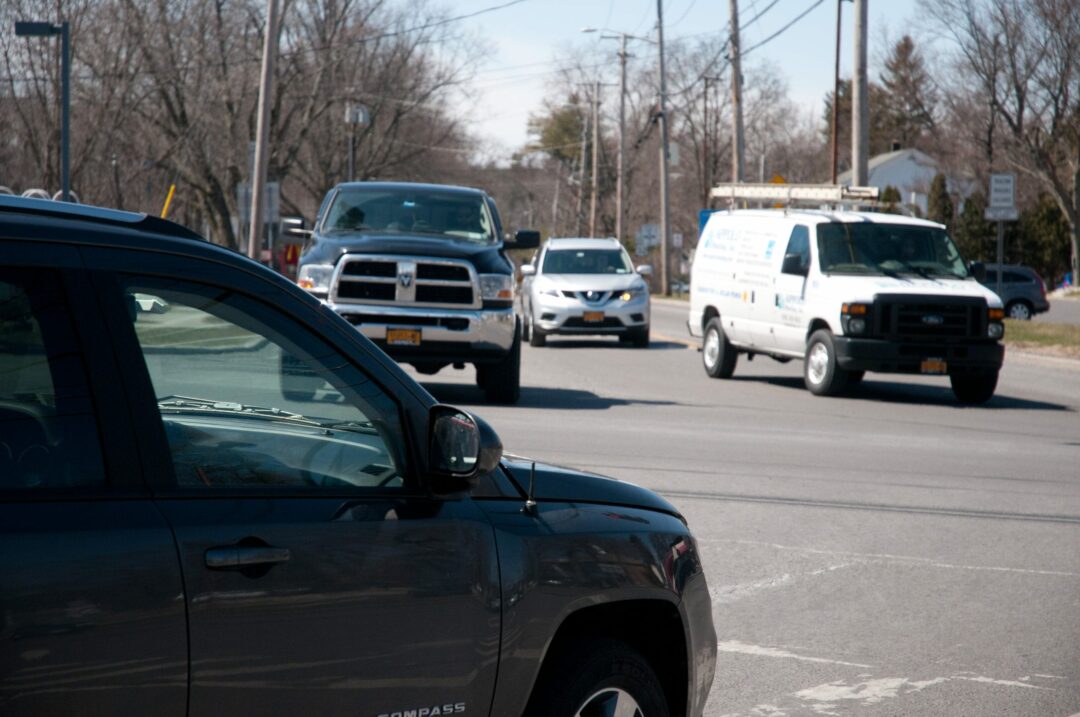 The dangerous dance of cars that traverse through Glenmont’s Babcock Corners may soon come to an end should a proposed traffic circle be approved. (Photo by Michael Hallisey/Spotlight News)

SELKIRK — A mother’s worst nightmare played out before her eyes as she watched a truck-and-trailer strike her daughter down while she was waiting for the school bus.

According to the police report, a driver from Otego, was operating a truck-and-trailer combination vehicle for a Coeymans Hollow company on Friday, Nov. 5. He was traveling northbound on Route 9W shortly after 7:30 a.m. when the vehicle in front of it slowed to make a left onto Hoffman Street. The truck driver did not have enough room to stop.

In an apparent attempt to stop from hitting the car in front of him, police said the truck driver went into the southbound lane, then made a left turn onto Hoffman Street. When he turned onto the dead end street, his truck struck 15-year-old Juliana Fahey as she was waiting for her school bus.

Fahey, a student at Ravena Coeymans Selkirk, was sent to Albany Medical Center. According to Bethlehem police she suffered only minor injuries. As of Monday, Nov. 8, she feels sore.

The driver was issued tickets on charges for failing to keep right and failing to obey a traffic control device. The police report did not issue her name on account of her being a minor and the victim of the accident. Spotlight Newspapers contacted her family and received their permission.

Renee Fahey has been advocating for changes to the stretch of Route 9W near her family home in Selkirk. The busy state road switches briefly from a two-lane roadway to a four-lane highway, with motorists permitted to travel at 55 miles per hour. But, she said they commonly go faster. A few days before Halloween, she captured one motorist as it buzzed by a school bus coming to a stop. She said she’s been encouraged by the Albany County Sheriff’s Office to record license plates and report them.

“Route 9W in Selkirk has been terrible for years,” she wrote on Facebook. “Vehicles get to where it turns into two lanes and they make it a speedway, and motorcycles in the summer time scare the hell out of us because they’re clearly going over 100… it boggles my mind that there [aren’t] more vehicles pulled over here, or more accidents.”

The following account of the accident comes from Renee. Any act described as a violation of the law is alleged.

Renee said she was parked across the street, watching over Juliana has she was waiting for the bus. The bus was running late, she said. Juliana looked over at her mother, each shrugging their shoulders, before Renee’s phone buzzed with an incoming text. It was Ravena Coeymans Selkirk’s notification service informing her that the bus was going to be 15 to 20 minutes late. As she was reading the notice, she said she heard a “loud, grinding noise.”

“When I look up I see a truck and a trailer flying down my road… I don’t see Juliana,” she said.  “I flew across the street and followed the truck down to the end of Hoffman street looking for blood on the ground, because I thought he was dragging my baby girl.”

Renee described the truck having turned abruptly into a neighbor’s lawn, settling near the woodline at the end of the road. The driver jumped out as she got out of her car, “you hit my kid,” she screamed. “Where is she?” From her account, he sounded just as frantic, repeatedly yelling, “I don’t know. I don’t know.” The driver from the other car yelled out to Renee, “She’s in the woods!”

The driver of the car that had stopped to make a turn off of Route 9W. She was waiting for on-coming traffic to drive by before crossing over the two lanes of traffic. She was turned and about to drive in when the truck cut her off “doing 50-60 miles an hour,” Renee said.

When the truck hit Juliana, the impact sent her flying back into the woods about 30 feet away. When the driver attempted to stop his truck, he allegedly told Renee that he applied his brakes so hard that it busted his brake lines, he no longer had the ability to stop. His truck eventually stopped after having dragged against the guardrails near the opening of the street, and resting at the woodline at the end of the road.

The stretch of Route 9W is commonly used by heavy commercial trucks as they travel back and forth from Coeymans and other points south to the New York State Thruway. To access the Thruway, trucks turn east onto Maple Avenue.

Renee said she’d like to see RCS evaluate their bus stops to make them safer for children. She’d also like to see heftier fines for motorists who drive past stopped school buses.

“There are so many scenarios and what ifs,” Renee said. “Sticking to the facts of this situation and the problem at hand is people don’t pay attention. Period. … Yesterday could have gone so much [worse] for our family,” Renee said.

Juliana “walked away” from the accident with a sore chest, arm and neck, Renee said. She believes a guardian angel — her father — was looking over Juliana when the accident occurred. At the end of the day, she peeked at the picture Albany Medical Center took of her husband for his visitor ID badge. She saw her own father.