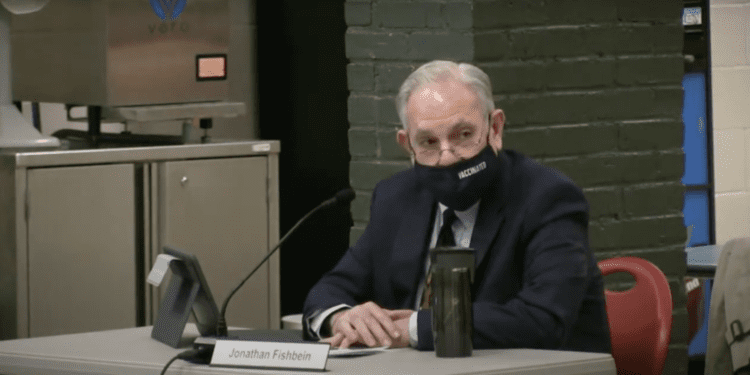 DELMAR — A contrite Bethlehem School Board Member told the community he was “mortified” once he learned a word he had used during a recent board meeting was offensive as he publicly apologized on Wednesday, Nov. 3.

“I want to apologize to the community and to anyone who was offended and hurt by my description of an Asain-American girl in the book ‘Eyes That Kiss [in the Corners],’’’ Jonathan Fishbein said. “I honestly had no idea and I was mortified to learn that the ‘O word’ was offensive to some. If I had been aware, I never would have used it. I chose my current public service in education because education is important for a culturally rich and diverse and inclusive society.

“I’ve learned from this experience and it will not be repeated.”

Bethlehem administrators set aside time during its Oct. 20 meeting to recognize its members as part of New York State School Boards Association School Board Recognition Week. Board members presented stacks of books of which they had chosen from a predetermined list that would later be donated in each of their names to various schools within the district.

Board members selected from a common theme of topics that included racism and cultural awareness from critically acclaimed books, some of which have been listed on the New York Times Best Sellers’ list.

Fishbein had shared details from his books to be donated to Hamagrael Elementary. Among the six titles he chose was Joanna Ho’s “Eyes That Kiss in the Corners.” The best-selling author, who is Chinese and is vice-principal of her San Francisco high school, wrote the story about a young Taiwanese girl who notices her eyes look different from her friends.

“‘And through her mother and other powerful women in her life she learns to really appreciate that her eyes are different, that they are beautiful, and it brings her a great sense of beauty in honor of herself and self-empowerment,” he said. “It’s a wonderful book. I hope every girl in the school gets to read it.”

But, instead of describing the main character as Taiwanese or Asian, Fishbein had used the term Oriental. The word, which derives from the Latin word meaning East, is widely considered a derogatory term when used to refer to people of Asian descent. Once commonly used, school administrators and government officials have since phased it out from use in curriculums, documents and legislation for being offensive.

School Board President Holly Dellenbaugh acknowledged that it was an “outdated” term and that mistakes while working towards social justice.

“I know that education and work on social justice issues is a lifelong process,” Dellenbaugh said, “and we all make mistakes. The important thing is to keep the conversation going so that we can learn from those mistakes and we can continue to improve and do better.”

Stealing over 300K on the job