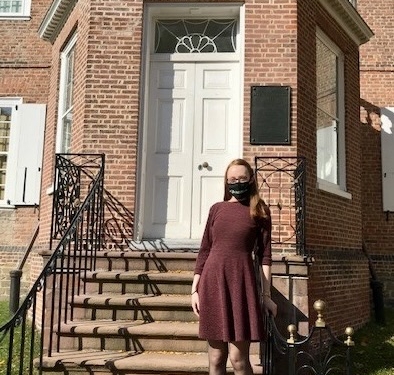 Jessie Serfilippi has been an interpreter at the Schuyler Mansion State Historic Site for the last four years. Prior to that, she was a site intern and educational intern at the Ten Broeck Mansion and an archives intern at the Albany County Hall of Records. She is a graduate of the College of Saint Rose and holds an master of fine arts in creative writing.

Q: What does an interpreter do and what are the tricks of the trade?

A: At its most basic level, a historical interpreter is somebody who reads primary sources and interprets them for the public. When people visit Schuyler Mansion, everything we tell them on tour is from sources we’ve read and studied over the years. One thing I find invaluable is speaking in a relatable way. If I use a phrase someone might be unfamiliar with, I work the definition into what I’m explaining. People also respond best to stories about people. History is so much more than a list of dates and events. When you’re able to tell someone about a specific person, the story becomes personal, more memorable, and reminds us history is a human story.

Q: Your most recent publication is As Odious and Immoral a Thing: Alexander Hamilton’s Hidden History as an Enslaver. How did you get interested in this topic?

A: When I started working here in 2017, everyone had already been dedicated to studying the people Philip and Catharine Schuyler enslaved for years. I joined in on that research, but also wondered about their children — did they enslave people as adults? Hamilton was just next on my list of family members to look into, partially because one of our former interpreters, Danielle Funiciello, had written two blog posts for the site about him and left the question out there. I wanted to see if I could find the answer, and once I learned enslaved people, I knew their story needed to be told; they needed to be honored and remembered.

Q: What is your favorite historic site in New York state and why?

A: It’s probably the expected answer, but my favorite historic site in New York state is Schuyler Mansion. Before I started working here, I visited multiple times because I was so intrigued by the history and felt a connection to the site I haven’t felt elsewhere.

Q: Why is it important for people to learn about and, when possible, preserve our history?

A: It’s important to learn history so we know where we came from, how the present is a result of the past, and how not to repeat the same mistakes of the past. Preserving historic sites allows for people to come to a place where history happened. It allows for a more personalized experience and often leads to a deeper understanding of history—especially histories people don’t talk about as often. By preserving historic sites, we’re preserving a space where these important conversations can happen and changes in the modern world can be made.

Q: If you could travel back in history and live for a year when would it be and why would you choose that particular era?

A: I wouldn’t want to live in a former time period for a year to be quite honest. If I could be a silent observer for the day, just a fly on the wall, I would choose the 18th century to get a firsthand account of the people and era I study and talk about daily.

A jagged road divided by ideas

LETTER: Vote no on two proposals this year