Poll: We are a nation divided, but still share core values 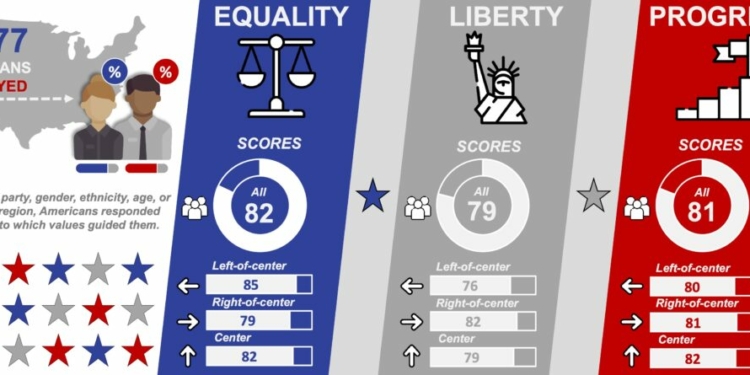 As a nation, we are as divided today as we have been in our 245-year history, according to a poll by Siena College Research Institute, but we still share many of the core values instilled by the Founding Fathers.

“Are we divided? Yes. Do we share core values? Absolutely. Are we proud to be Americans? For the most part. Do we think our great experiment will weather this storm? We’re somewhat hopeful, but concerned,” said SCRI’s Director, Don Levy.

Using a technique called cluster analysis Levy said 35 percent of the respondents were “left-of-center” in that they support voting rights, abortion, a ban on assault weapons, a path to citizenship, do not think the 2020 election was stolen and do not think mainstream media is fake news. And 34 percent were “right-of-center “in that they hold the opposite view on virtually all those issues with the notable exception that they do not oppose an expansion of voting rights,” he said.

“The remaining 31 percent, we identify as centrists as they tend to hold positions as a whole between the other two groups although with the exception of their appraisal of the media, they lean more to the left on these issues than to the right,” he said.

“These numbers appear to tell the same now familiar story of a divided nation that disagrees on issues and can be readily assigned to one ‘team’ or another with a less politically engaged group of citizens voters left in the middle,” Levy said.

“One might argue that these values, whether we are talking about perceiving others as equal, being of service to others, saying that Americans should be self-reliant, endorsing free and varied speech, believing that no one is above the law, etc. mean different things to different people,” Levy said. “However, we choose to highlight that beneath the current partisan divides, as real as they are, we find an underlying base of not just support for traditional American values, but more importantly, an assertion that those values guide us in our thoughts and actions on a daily basis.”

SCRI conducted extensive open-ended interviews with additional respondents and found that by and large they are “proud to be an American.”

“America, they told us, while not perfect, is the country, the idea that everyone wants to be part of. Some described Americans as kind, compassionate and generous,” Levy said. “But others focused on what they see as a lack of understanding among us driven by siloed hate speech and a litany of prejudice, stereotyping and discrimination.”

While many told pollsters the country is “held together by the Constitution, Bill of Rights and the Declaration of Independence, at the same time they cited partisanship and the continuing debate over the outcome of the 2020 election as pulling the country apart.

In addition to partisan politics, race and systemic racism came up as current issues that respondents say are breaking us apart.

“Rounding out the list of factors that divide us, interviewees talked about the media and social media ­— ripping us to shreds, class and the myopic quest for personal enrichment, disagreements on social policies including immigration, healthcare, gun control and abortion and to some, most importantly, what they describe as ignorance among many Americans,” Levy said. “What they seem to mean by ignorance, is a failure to entertain multiple perspectives and to curate edited information prior to adopting a position that all too often becomes inflexibly held.”

Several respondents spoke of being afraid to express an opinion that deviates from the orthodoxy of either the left or the right.

“There’s no middle. It’s basically if you believe in conservative ideas and if you’re conservative and you believe some progressive ideas, your own party or your own people will bash you because you express those feelings,” Levy said. “The same from the left side, if you express some conservative ideologies, you want to be in the middle, we bash you. So, it’s just that people have to choose to be all the way to the right or all the way to the left. That’s the issue.”

Based on the poll, SCRI formulated some suggestions including repairing the separation of powers, pass legislation that protects every American’s right to vote, consider term limits for members of Congress and enact campaign finance reform.

Still, by and large, Levy said, the interviewees are “proud Americans.”

“The American Values Study is a starting point for a robust national conversation that must end with action,” said Chris Gibson, Siena President and a former U.S. representative in Congress. “We need reform now to restore faith in our institutions and democracy itself. Legislators need to stop opposing any collaboration with the party-opposite and empower Congress to restore the balance of the separation of powers. We need to do the hard legislative work to restore Americans’ faith in the relationship between the people and our government, and as envisioned by the Founders, to encourage all citizens to do their patriotic duty to engage in the process of self-governance.”

The national poll was conducted online by questioning 6,077 Americans.