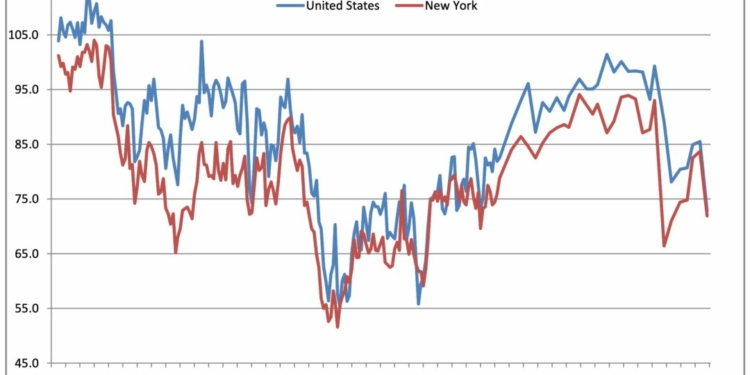 ALBANY — The state Index of Consumer Sentiment plummeted nearly 12 points over the last quarter, according to a poll by the Siena College Research Institute.

“A lingering pandemic, inflation, supply chain concerns and little good news out of Washington pulled the plug on consumer sentiment as summer turned to fall,” said Doug Lonnstrom, a professor of statistics at Siena College and SCRI founding director. “With virtually every number down, most future numbers by double digits, consumers’ willingness to spend even as the holiday season approaches, hit a statewide low since June 2020 and a low not seen since 2011 among Upstaters.”

Consumer Sentiment stands at 71.9, down 11.8 points from the second quarter of 2021 and .9 points lower than the nation’s index of 72.8. The overall, current and future indexes of consumer sentiment are all below the breakeven point at which optimism and pessimism balance, according to the poll.

In the third quarter of 2021, buying plans were down from the second quarter in every category measured:

Furthermore, 54 percent, which is unchanged from the last quarter, of New Yorkers say gasoline prices are having a very serious or somewhat serious impact on their financial condition and 66 percent, up from 63 percent, of state residents have the same concerns about groceries.

“Plans to purchase major consumer goods all fell with major home improvements down by 10 percentage points,” Lonnstrom said. “And as gasoline prices have left $3 in the rearview mirror, over half of New Yorkers are again sighing at the pump and worse yet, food prices have two-thirds, highest since 2015, crying at the grocery checkout lines.”