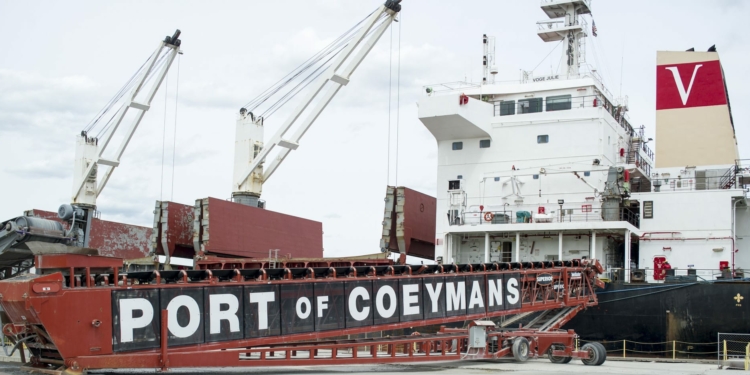 The move towards renewable energy impacts some of the most unlikeliest of places. Both ports in Albany and Coeymans increased business due in part to the New York State Offshore Wind Master Plan that named them ideal locations to assemble windmills that are to be installed offshore. Jim Franco / Spotlight News

The announcement was made by Lt. Gov.  Brian Benjamin from the Port of Coeymans and the agreement solidifies New York as a major construction hub for the Sunrise Wind project and positions the port to be among the first in the country to be mobilized for the construction of advanced foundation components for an offshore wind farm by U.S. workers.

“The development of the U.S. offshore wind industry is a once in a generation opportunity that is providing significant economic and environmental benefits to communities across the state,” Benjamin said. “In seizing this moment, we are creating a new workforce of skilled labor, which will be able to compete globally and attract new supply chain businesses to support the offshore wind industry, and in turn drive New York’s green economy.”

It is anticipated 115 local union workers will be based at the Port of Coeymans to construct hundreds of large-scale and specialized components that are fundamental elements of the wind farm’s turbine foundations. These components, ranging in size from 12 to 120 tons each and as tall as 40 feet, include the foundations’ internal and external platforms, railings, steel ladders, cages, and other key parts that will attach to the monopile foundations the wind turbine generators will stand upon.

Ljungström LLC, of Wellsville, in Alleghany County, New York, will manufacture the steel components and deliver them to the Port of Coeymans. According to the governor’s office, this will create at least 100 jobs in Western New York.

With the execution of this contract, Riggs Distler & Company, Inc, a leading union construction solutions firm with offices in Mt. Vernon and Saugerties, New York, and Cherry Hill, New Jersey, will serve as the general contractor to build the prefabricated advanced foundation components at the Port of Coeymans.

Once complete, the components will be shipped down the Hudson River and out to the Sunrise Wind offshore wind farm site, located in federal waters roughly 30 miles east of Montauk Point, N.Y. Riggs Distler is a wholly-owned subsidiary of Centuri Group, Inc.

“We’re building a domestic supply chain and establishing a long-lasting industry that will be key to achieving the nation’s green energy and economic goals,” said David Hardy, Ørsted Offshore North America CEO. “We’re delivering on our commitment to bring thousands of new, union jobs to New York by partnering with regional suppliers and locating Sunrise Wind’s construction hub in the Capital Region, which provides access to a skilled workforce and a reliable port for transit needs.”

Ørsted and Eversource, as part of Sunrise Wind, will also launch a $1 million workforce training initiative under the strategic leadership of the Center for Economic Growth.

“We are going to be bold in how we achieve our climate goals and with our upcoming early 2022 offshore wind solicitation, New York will again demonstrate its national leadership in the acceleration to a green economy.”