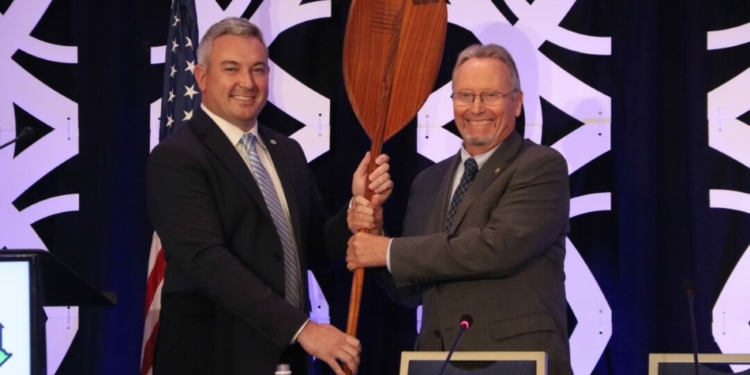 ALBANY — State Agriculture Commissioner Richard A. Ball was elected to serve as the National Association of State Departments of Agriculture 2021-2022 President.

Ball officially accepted the designation at NASDA’s annual meeting in Louisville, Kentucky a few weeks ago.

“I am honored to be elected NASDA’s new president and to lead as our states work together to ensure that agriculture continues to grow and thrive,” said Ball. “I have long valued the opportunity to gather with some of the best minds in agriculture, our commissioners, secretaries and directors of agriculture, as well as our community partners, collaborating through NASDA to advocate for and implement change that will have a lasting impact on our shared industry. The policies set forth and implemented by NASDA this year will deliver on our collective commitment to address the most important and pressing agricultural issues of today while strengthening our farms and food supply for the future.”

Ball was appointed to Commissioner of the New York State Department of Agriculture and Markets by former Gov. Andrew Cuomo in 2014.

Ball comes from a family of farmers. His grandparents were lifelong dairy farmers. At 18, he began his career as a farm worker on a vegetable farm. He later became operations manager of that same farm. After 20 years there, in 1993 the opportunity arose to be a farm owner and for the past 27 years, he has been the owner and operator of Schoharie Valley Farms in Schoharie, NY, which consists of 200 acres and produces a wide range of vegetable crops, small fruits and greenhouse crops. The farm serves both retail and wholesale consumers through an onsite farm market and ships to brokers and restaurants in the local area as well as New York City.

Ball has held a number of positions within agriculture and community organizations at the local, state and national level, including the New York State Vegetable Growers Association, the New York Farm Bureau, the American Farm Bureau and the Schoharie County Chamber of Commerce.

Ball previously served as vice president on the National Association of State Departments of Agriculture Board of Directors.

As president, Ball will help guide the implementation of the policies adopted at NASDA’s 2021 annual meeting, including expanding emergency food supply networks; emphasizing the importance of free interstate commerce; growing the hemp industry; and promoting agricultural workforce reform. This is in addition to NASDA’s priority issues, which are trade, food safety, food systems, workforce development, infrastructure and capacity, and climate resiliency.

NASDA members also elected a new slate of officers for the coming year.  To find out more, please visit nasda.org/RedefiningAgriculture.

NASDA is a nonpartisan, nonprofit association which represents the elected and appointed commissioners, secretaries, and directors of the departments of agriculture in all 50 states and four U.S. territories. NASDA grows and enhances American agriculture through policy, partnerships and public engagement.

SPOTTED: Shaker gets by CBA in battle of Class AA unbeatens