Cardona’s cuts the sub in Latham

New store at a familiar location 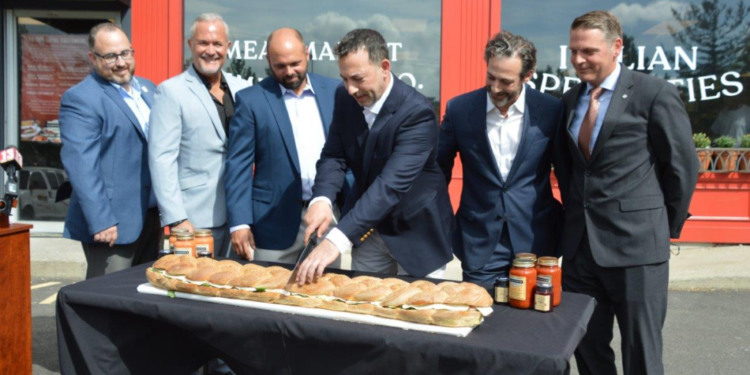 The Latham market will feature Cardona’s hot table, offering more than a dozen dishes which rotate daily. It will have a full-scale commercial kitchen to accommodate catering orders and operations. It will also offer an array of fine Italian import goods; restaurant-quality grab-and-go meals; artisan sandwiches and salads; homemade sauces and famous meatballs.

“We are thrilled to celebrate the grand-reopening of our newest location and excited to bring the quality and convenience of Cardona’s Market to the Latham community,” said Cardona’s Market owner August Cardona. “We are honored to have the opportunity to share our rich family traditions and menu offerings with our neighbors in the Latham community.”

Cardona’s Market celebrated the grand re-opening of the Latham store with an official “sandwich cutting” featuring a four-foot “Frank B.” sandwich, which is named in honor of Frank Bolognino, the second-generation owner of Roma Foods Importing Company along with his brothers John, Peter and Paul.

The “Frank B.” features imported prosciutto, fresh mozzarella, spinach, roasted red peppers, tomatoes and extra virgin olive oil and will be a permanent and exclusive addition to the menu at the Latham market. It pays tribute to the legacy of Roma Foods Importing Company, a fellow multi-generational, family-owned Italian food and goods purveyor.

The Latham market will also offer a sandwich called the “Rabe C.,” which has been named in honor of Robert Cardona, Jr., the co-owner and executive chef at Cardona’s Market. The “Rabe C.” features fried eggplant, sharp provolone, hot pepper spread, broccoli rabe and a balsamic glaze.

“We are thrilled to welcome Cardona’s Market to the Latham and Colonie communities,” said Colonie Chamber of Commerce President Tom Nolte. “Roma Foods Importing Company was the place to go for all Italian cuisine and products for decades and we are thrilled to see a similar family-owned business continue to carry on the rich traditions in our community.”

With its acquisition of Roma Foods, Cardona’s also took over the company’s Saratoga Springs market, which has been operating under the Cardona’s banner since June and will undergo its own renovations with an anticipated grand re-opening in late spring 2022.

Cardona’s, which was founded in October 1945, will continue to operate its original flagship storefront at 340 Delaware Ave. in Albany.

Public benefit for CSSC new building would be $176,000

SPOTTED: Shen bests Shaker in re-match of a championship game that never happened