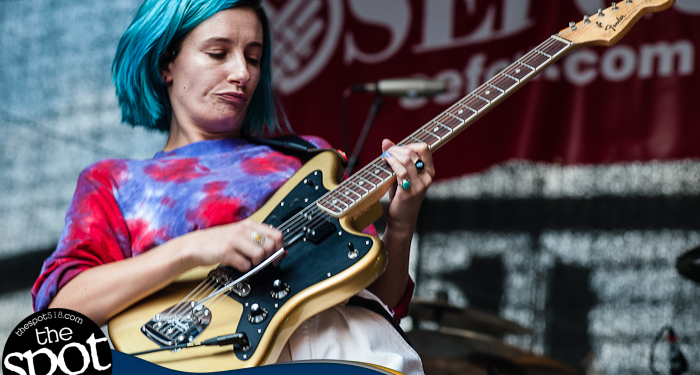 ALBANY — The skies stayed clear as a crowd amassed on North Pearl Street for the return of live music at Pearlpalooza on Saturday, Sept. 18.

The afternoon opened up with a yoga session as extra-bendy health enthusiasts laid out mats on the blacktop for Yogapalooza before Timbre Coup took to the stage.

Glass Pony followed, playing in front of a crowd that steadily grew as the afternoon sun descended behind The Kenmore. It was a picture-perfect afternoon that had previously promised rain showers, but the precipitation stayed at bay as live music revealers enjoyed a marriage of live and recorded music between the bands and CDs spun by WEQX radio personalities.

The sister-brother rock tandem gave way to headling act Slothrust. Lead vocalist and guitarist Leah Wellbaum was the most colorful wallflower one will ever see as she donned blue hair and rainbow-colored Vans. Fans have been already been jamming to three of the band’s tracks prior to the release of its latest LP “Parallel Timeline,” which dropped earlier this month.