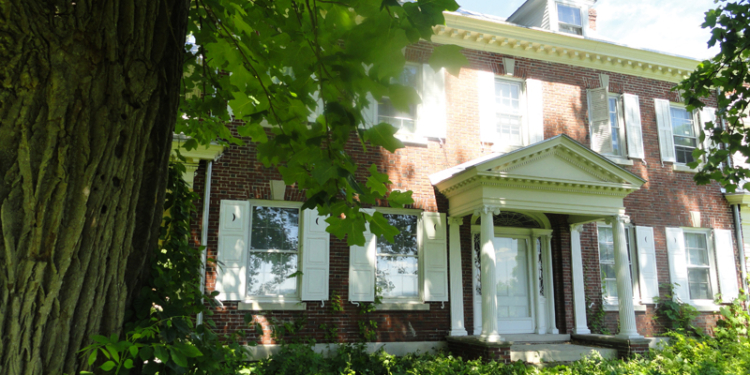 The home features a grand, wooden staircase that leads to spacious bedrooms on the second floor and a grand, third-floor ballroom. Drew Hingson

COEYMANS — On the hills rising above the banks of the Hudson Rivers sits a stately Georgian Colonial with a past that’s for sale should you have enough money to buy it.

“The history is all there on my website,” said Klemm Real Estate agent, Drew Hingson.

The Litchfield, Connecticut-based real estate company markets homes of all kinds, but specializes in high-end properties that warrant seven-figure prices. Last year, it garnered $16.5 million for the Atalanta Estate in Dutchess County. That property was erected in 1851 between the towns of Rhinebeck and Red Hook. Also overlooking the Hudson, it was built for Franklin Hughes Delano and his wife Laura Eugenia Astor.

The Coeymans property has its own history, with a relatively approachable asking price of $2.9 million.

Known formally as the Wedding Present Farm, the 73-acre estate presents a palatial manor home made of local brick. It’s unmolested views of the Hudson River were said to be used by the former proprietor of the Knickerbocker Ice Company that harvested ice from the river. But, it derives its name from the land’s initial owner, Edward Townsend Reed.

Reed, a notable lawyer, merchant and agronomist, gifted the land as a summer home to his newly-wed friends Edward and Martha Van Antwerp Easton in 1907.

Reed and Easton were prominent Albany attorneys, Yale men and mercantilists — Reed in seed and Easton in lumber. Martha’s son-in-law Ten Eyck Powell, upon marriage to her daughter Kate V.A. Easton, joined the household and raised their family there.

“This stately Georgian Colonial was erected in local brick in 1910 so as to maximize views of its elongated Hudson River shoreline and distant prospects of the Berkshire Mountains,” Hingson’s website reads. “Wedding Present Farm is set amongst a string of storied Manor Houses and River Estate Farms south of Albany that articulated life for prominent families.”

Characteristic of a Georgian Colonial, the manor house features a red brick facade with accents of the Grecian Revival movement popular the century before. Red bricks are married with white pediments and columns, and a cupola stands atop a second-floor porch on the corner.

House guests are greeted by a grand, wooden staircase. Grecian accents continue through the interior of the home with stately looking cornices in over-sized public rooms featuring oak floors and large windows admitting light from both ends. French doors open into a living room, complete with a carved fireplace and abundant bookcases. Another fireplace is found in the dining room, expressed by high-panel wainscotting. The adjoining kitchen includes a Butler’s Pantry with marble countertops. There are five bedrooms throughout the estate, the largest of which is the 31-by 17-foot master bedroom on the second floor.

And for socialites looking to entertain guests indoors, there’s a 40-by-25-foot ball room on the third floor, with wide board floors bookended by facing fireplaces.

Trip Powell, the great grandson of Edward Easton, called the wedding present story a “realtors fancy” while commenting about his family’s former estate online. According to his family history, the Powell family moved out of Wedding Present Farm sometime around 1940, selling it to John Hall Blackburn, heir to a prominent coal business in Albany.

Blackburn lived there for 50 years, once leading the charge against Coeymans centralizing its schools into the present day Ravena Coeymans Selkirk School District. He died around 1990. His wife, Ruth, stayed at the home until she died in 1992.

“The house was renovated in about 2008 and sold,” Trip said. “I was in it recently, and despite years of disuse, it is a magnificent place.”

Board members back Mateja for Colonie town super