Bethlehem Central: Teachers, staffers need to be vaxxed by start of school year 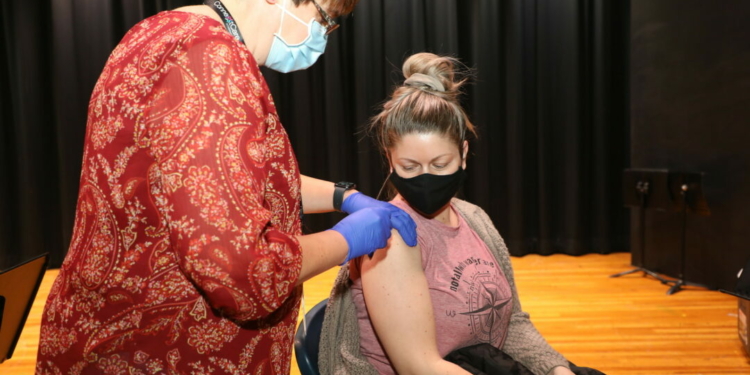 DELMAR — With a little more than a week before the start of the school year, Bethlehem Central is requiring its teachers and staff members to receive a COVID-19 vaccine by Thursday, Sept. 9 — the first day of school.

The Bethlehem Central Board of Education voted unanimously to issue the mandate following Superintendent Jody Monroe’s presentation on the district’s return-to-school plans at its meeting on Wednesday, Sept. 1.

“We have two goals this school year,” Superintendent Monroe said. “To make sure we have a safe and effective learning environment for our students, and to bring back all of our students for in-person instruction. One goal informs the other, and this directive by the Board will help us reach both of these objectives.”

According to the district, of the more than 850 people it employs, 88 percent are fully vaccinated or have received the first in a series of two shots.

In the weeks leading to the start of school, the district has touted a layered mitigation strategy to facilitate its commitment to a full return to in-person learning for the 2021-22 school year. The district is also following state guidelines and requiring all individuals to be masked while inside district buildings. The district will be updating its COVID mitigation document that had been shared with parents last month following meetings between district administrators and employee bargaining units.

Gov. Kathy Hochul implemented a statewide mandate requiring masks inside schools shortly after she was sworn into office on Aug. 24. The order was first preceded by several protests across the state from parents balking at the prospect of having their children wear masks all day. However, since the mask mandate, there had been hints that the new governor would require vaccines from teachers and school staffers.

In August, the New York State United Teachers voiced its support for the new governor and the universal requirement for masks in state classrooms. However, it has also advocated for adequate testing for teachers, at no cost to them.

The union, affiliated with the American Federation of Teachers, the National Education Association and the AFL-CIO, represents more than 600,000 educators, human services and health care workers in New York. Prior to Hochul, the teacher’s union voiced its stance against forcing vaccination through a mandate.

“We have advocated since the beginning of the year that any educator who wants a vaccine should have easy access to one,” the union shared in a statement on Aug. 4. “We would support local efforts to encourage more vaccinations, such as through programs that require that those who are not vaccinated get tested on a regular basis. But it’s critical that districts come up with plans to make testing available on-site and at no cost. What we have not supported is a vaccine mandate.