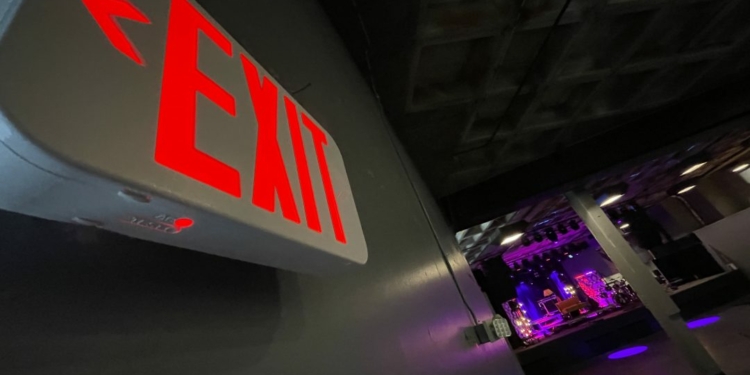 ALBANY — At the end of the night, Ted Etoll was mingling among friends with his back to the bar watching over the expansive room of his new downtown club.

“It was spectacular,” he said, after hosting a private, pop-up show featuring Jocelyn and Chris at his Empire Live, the Capital City’s newest live music venue. He and Stan Levinstone took what Step Up Presents and SLP Concerts respectively made out of Upstate Concert Hall for nearly 15 years and placed it into the former Capital Repertory Theatre. Like many other dreams deferred by COVID, it was supposed to open last year. “We never thought that this day would come.

“But it’s here, and we’re going to build an Empire.”

Only the stone mosaic wall art remains from the Rep, which presented its final show at 93 No. Pearl Street last March before moving up the street. The lobby of the former theatre is gone. So are the sofas, the snack bar and anything else resembling a playhouse — including its stage.

As soon as people walk into the joint, they’re looking at the 1,000-person capacity room. Patrons are introduced by a familiar sight, at least to those who spent time at Upstate Concert Hall: The bar. One of two brought down from the Clifton Park room. At the other end of the performance hall is the stage. Between it all is enough real estate to rival that of The Egg.

“It looks like a club,” Jeff Buell said as he congratulated Etoll on the night. It was a celebration for both of them. Buell’s Redburn Development was responsible for renovating the space. There are few corners of North Pearl Street Buell hasn’t touched in recent years. Between The Knick and the Kenmore Hotel, Redburn Development has rehabilitated long-vacant buildings into coveted apartments and commercial spaces. In an incredulous admission, he said, the club was the most important.

“This is going to get people here,” he said. And he was right.

Within an hour, Empire Live was the epicenter of the local scene. It opened its doors on a Wednesday night to stretch out the legs on its newly installed sound system. Maybe 30 people were in attendance, but those who were there played out like a Who’s Who of Albany’s music world.

Jeff Morad, of WEQX, and Vito Ciccarelli, of RadioRadioX were there. El Modernist’s Will Hahn and Will Fredette were walking around — a few years before, they were performing outside the front door to start off Pearlpalooza. Jim Murphy and Sal Prizio, of Proctors Collaborative, were also in court. And, of course, Greg Bell was there, too. At one point, Wild Adriatic’s Rich Derbyshire pulled his truck up to the side of the street just to say hello. Then, Bad Mothers’ Brian Chiappinelli waltzed into the room. Tomorrow the club hosts Cold War Kids. Tonight, however, was Jocelyn and Chris.

The night’s guests were treated to an exclusive performance. Jocelyn and Chris just returned from a tour. Their travels were highlighted by two nights with Foreigner last weekend just as the newest single “Sugar and Spice” continues to gain traction on national radio.

”It’s our homecoming,” Chris said. “We haven’t played Albany in such a long time.” In the three years since they last played in the Capital City, the band launched off of a live, nationally televised performance on the Today Show. “We had so much planned for 2020. … We had so much momentum going, and then the pandemic happened.”

Jocelyn and Chris both talked about the 18 months in which they couldn’t play in front of a crowd. They did like many other artists, they live-streamed from home. If they weren’t performing from their couch, they got together with their followers, the Arndtvarks, to gather a playlist based on themes. Last weekend’s theme was “wind” to pay homage to Hurricane Henri. Local Arndtvarks who made it to Pearl Street on Wednesday were treated with a teaser to the band’s next radio release, “Run Away.” Jocelyn and Chris performed the song from that same coach which they’ve since incorporated into their live acts.

“It’s a beautiful venue,” Jocelyn said, before saying goodnight to the crowd. “Thank you, Empire Live for allowing us to be your guinea pigs.”