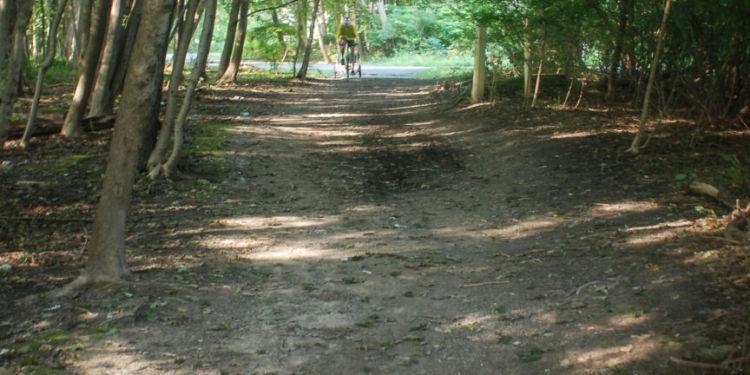 The path from Delaware Plaza to the Rail Trail in Delmar.

DELMAR — A 74-year-old man is still in pain after he was assaulted on two separate occasions, allegedly by the same man, within a few hours on Sunday, Aug. 22.

According to the Bethlehem Police Department, the victim was first approached by a white male wearing dark clothing Sunday morning, at approximately 10:30 a.m. The culprit started speaking with the victim, but reportedly was not making sense. During the course of the conversation, the suspect threatened to steal the victim’s bike. After the victim refused to relinquish the bike, the suspect allegedly pushed him to the ground.

Officers responded to the first incident where the victim was released after filing a criminal report and refusing transportation to the hospital. He proceeded to Delaware Plaza where he encountered his attacker, again.

“[The victim] asked why he pushed him to the ground,” Cmdr. James Rexford shared in an emailed statement. “The suspect at that point pushed the victim down again this time injuring the victim.”

According to the victim’s son, the blow sent him to Albany Medical Center where he was treated for various injuries, including two cracked ribs.

It is this newspaper’s policy to not divulge the names of crime victims in news stories. We have extended the same privacy to the victim’s son, though he has gone public on social media.

“This person felt it fine to assault my 130-pound, 74-year-old father, walking his bike on a path,” he said. “Who attacked my beautiful, kind, amazing father in broad daylight?”

Bethlehem police checked the surrounding area, but could not locate the attacker. The attack is still under investigation.

The son said his father rides his bicycle a few miles every day on the Albany County Helderberg-Hudson Rail Trail. The trail runs behind the popular suburban mall. A makeshift footpath between the backside of the mall and Ellsworth Avenue, which runs parallel to the trail.

According to the son, his father’s attacker was described as a white, 20-something man. He appeared “unbalanced” and spoke with a “street-talking accent.”

His father, who frequently shops at the Hannaford shopping mart, was supposedly told that the grocery store had previously banned a man for having harassed and threatened both customers and staff. The son said he wondered if it was the same man.

“We need to apprehend this individual before they assault another senior citizen,” he said.