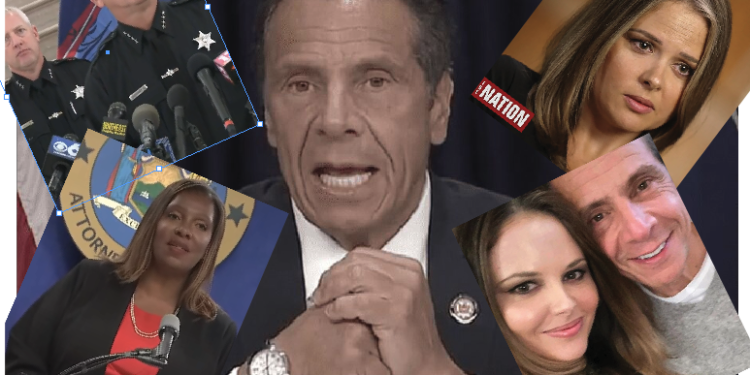 ALBANY — One of the worst kept secrets in the Capital District is no longer a secret.

Brittany Commisso, the estranged wife of one of Albany’s most well-known political families, shed her anonymity in front of a national audience on Monday, Aug. 8. Prior to the interview that aired on “CBS This Morning,” Commisso was known as Executive Assistant No. 1.

Regardless of the name, she has lobbed the most serious accusations at Gov. Andrew Cuomo and last week, through her attorney, Brian Premo, filed a criminal complaint with Sheriff Craig Apple.

The sheriff, during a press conference, said his office will not favor either side and the investigation will be like any other “except with more eyes” watching. He said he has talked with District Attorney David Soares, whose office will be involved in the investigation that could lead to misdemeanor charges if the allegations are substantiated.

“I think as far as the sheriff’s office, I am elected as well and we have a proven record of taking care of people. We have a young lady who says she was victimized and we want to do everything in our power to help her,” Apple said. “We are not going to rush this because of who he is and we are not going to delay this because of who he is. We are going to conduct a very comprehensive investigation and when the facts and the data and the evidence are compiled we will make a decision at that point (on whether to proceed with charges.)”

Commisso’s estranged husband is Frank Commisso Jr., who was on the Albany City Council and who ran for mayor of Albany in 2017. His father, Frank Commisso Sr., was first elected to the Albany County Legislature in 1983 and for years was majority leader, a position that became more powerful than the chairman because he controlled what bills passed and how money was spent as the Legislature has final say over the county budget. A recent shakeup in the Albany County Democratic Party stripped the elder Commisso of his power position but he remains a legislator.

Britany Commisso, 33, told CBS and the Times Union basically what was already in the report released by state Attorney General Letitia James except this time she put her name and face behind the narrative.

She said the governor hugged and engaged in other unwanted touching and flirting shortly after she began working in the executive chamber in 2017.

“These were not hugs he would give his mother or his brother. These are hugs with the intention of getting some personal sexual satisfaction out of them” she said on CBS. “And then, they started to be hugs with kisses on the cheek and at one point he went to kiss me on the cheek and quickly turned his head and kissed me on the lips.”

The unwanted touching escalated, Commisso said, and on around Nov. 16, the governor called her to his office for assistance on a rudimentary cell phone issue when he slammed the door shut.

“It was then I said, ‘You’re going to get us in trouble.’ I thought to myself, ‘That probably wasn’t the best thing to say.’ I was so afraid the mansion staff were going to come up and see it,” she said on CBS. “He came back to me and that’s when he put his hand up my blouse and cupped my breast over my bra. I remember looking down, seeing his hand, which is a large hand, thinking to myself, ‘Oh, my God. This is happening.’”

The AG’s report found credible evidence the governor had sexually harassed 11 women, including Commisso and a state trooper assigned to the detail assigned with the governor’s personal protection. Whether or not the unwanted advances constitute criminal conduct is an open questions, but so far Commisso is the only one to lodge a criminal complaint.

“We found Executive Assistant #1 to be credible both in demeanor and in the substance of her allegations. The experiences she had with the governor were difficult for her to recount, but she did so with care and seriousness,” according to the AG’s reports. “She testified about what she could recall with specificity and she credibly noted things that she did not recall. She did not overstate or seek to exaggerate the allegations, but simply recounted the incidents she remembered.”

The governor’s office said it referred the matter to the Albany Police Department when the accusations were first reported in the Times Union. The governor also, in an 85-page “position paper,” disputed the AG’s report by stating many of the allegations of inappropriate touching stem from his Italian heritage and his inappropriate questions as an effort to alleviate the stress of working in a high-pressure environment.

“The governor was stunned by her claim made for the first time in early March 2021 (after Lindsay Boylan and Charlotte Bennett’s claims were made public) that he groped her breast under her shirt and over her bra in his mansion office during a workday in November 2020,” according to the paper. “This claim is false, as the governor has stated repeatedly and unequivocally. Ms. X retained a personal injury lawyer who contacted the Executive Chamber on March 8, 2021, claimed that the governor had groped her breast in his office during the workday and indicated he planned to file an administrative complaint on her behalf — a common precursor to filing a civil lawsuit for damages.”

The narrative claims Executive Assistant No. 1 was at the mansion that day for more than three hours and released a detailed account of how the governor spent the day. The woman has since said it was around that day and the governor’s phone records would tell when she was summoned to the mansion by one of his top assistants, Stephanie Benton.

At least four other DA’s around the state have requested more information from the AG about evidence that could help the investigation into potential criminal charges.

Soares and Apple say they will reach out to the AG’s office for any and all information that contributed to the report and they both said they will speak with the victims.

Meanwhile, the Assembly Judiciary Committee, the body charged with exploring any possible impeachment proceedings against the governor, met Monday and was expected to outline a plan of action behind closed doors before releasing it to the public.

According to a number of reports, the committee gave the governor until Friday to answer the charges outlined in the AG’s report as well as other potential grounds for impeachment including how his office handled nursing home patients during the COVID-19 pandemic and how the data was compiled and released and whether or not state resources were used to write a book, which came with a $5 million bonus to the governor.

While Cuomo shows no signs of doing nothing but battling on, calls for his resignation have been increasing and now include President Joe Biden and Jay Jacobs, chairman of the state Democratic Party and a longtime Cuomo loyalist.

“In February, I called for the governor to resign,” said Assemblywoman Pat Fahy, D-Albany. “The reasons are now amplified. But we need to ask: what is it about this man and the power of his office that allowed abusive behavior for so long. This is not just about Cuomo. We need constitutional reform of the governor’s office.”

“We all deserve to be safe at work. Sadly, these women were not and I commend them for coming forward and sharing their traumatic experiences. I also commend our attorney general and her investigators for their professional and thorough investigation,” said Assemblyman Phil Steck, D-Colonie. “A corporate CEO, no matter how successful, would be fired for creating an environment that degraded and harmed so many women. A State that champions women’s rights cannot have a governor who does not respect those rights. It is time for Andrew Cuomo to step down.”