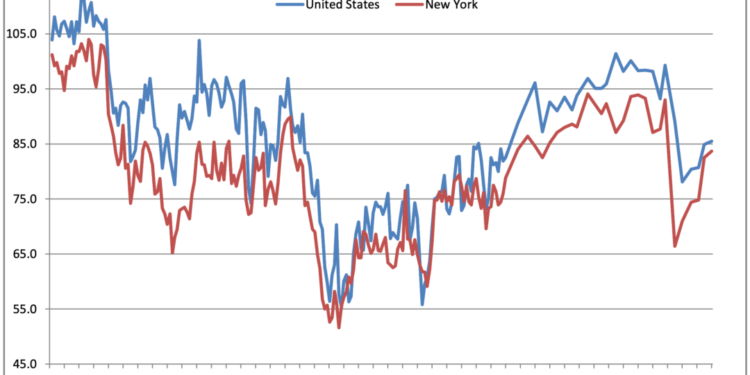 LOUDONVILLE — The state Index of Consumer Sentiment stands at 83.7 this quarter, up 1.2 points from the first quarter of this year, according to a poll by the Siena College Research Institute. That is 1.8 points below the nation’s index of 85.5 percent.

The overall and future indexes for New York each increased this quarter and remain above the breakeven point at which optimism and pessimism balance. The current index also increased, and is at breakeven.

“Consumer sentiment continued to climb this quarter driven by increases in New York City, among Democrats and as the state’s lowest income bracket residents start to see light at the end of their economic tunnel,” according to Doug Lonnstrom, professor of statistics and finance at Siena College and SCRI founding director. “Overall, New York is up 17 points from the initial COVID shock as belief in a better tomorrow is now nearly as strong as it was before the pandemic. Upstate isn’t moving towards ‘Happy Days’ as quickly as NYC but outside of the city the future looks brighter than it did in March 2020.

“But, as concern over the impact of gas now exceeds 50 percent and approaches two- thirds for food, price increases, or inflation, could slow this recovery,” Lonnstrom said.

Buying plans were down slightly for furniture to 31.8 percent, from 32.0 percent.

This Siena College Poll was conducted June 16-29 by random telephone calls to 404 New York adults. It carries a margin of error of +/- 4.2 percentage points.