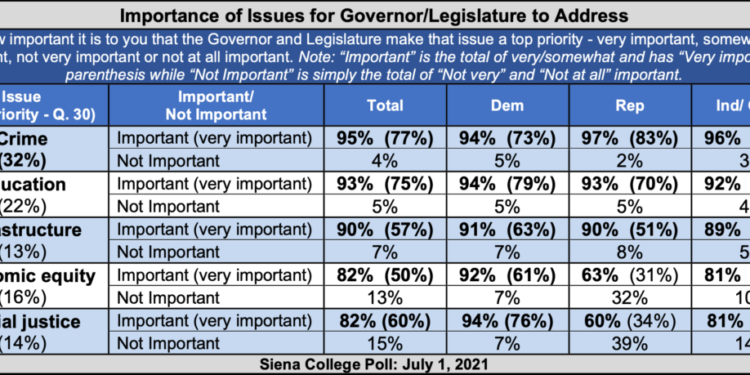 LOUDONVILLE — Just 33 percent of New York voters think Gov. Andrew Cuomo should run for re-election, according to monthly tracking poll released by the Siena College Research Institute, and 56 percent say they would “prefer someone else.”

That compares to 37 percent who thought he should run for a fourth term last month and 53 percent who would prefer someone else run for governor.

Less than a quarter, 23 percent, think he should resign immediately as he remains embroiled in a number of scandals including fudging nursing home deaths during the COVID-19 pandemic, using state employees to help write a book on COVID-19 that netted him $5 million and several allegations of sexual harassment.

According to the poll, 39 percent say he should serve out his term but not seek re-election in 2022. Cuomo has not yet made public his plans.

“The good news for the governor is that only 23 percent of New Yorkers want him to resign immediately. However, when you add those voters to the 39 percent who say he should serve out his term but not seek re-election, 62 percent say he should not run for a fourth term,” said Siena pollster Steven Greenberg said. “Twenty-seven percent of white voters want to see him run again, as do 40 percent of Latinos and a majority, 52 percent, of Black voters.”

The state Assembly is currently conducting an investigation into whether or not there is enough evidence to impeach the governor. The poll found 45 percent of New Yorkers say he should not be impeached while 35 percent, including 25 percent of Democrats, think he should be removed from office.

Voters, by a 42-32 percent margin, say investigations into allegations of sexual harassment against Cuomo will find evidence of harassment. Republicans strongly believe it, as do a plurality of independents. Democrats are evenly divided, Greenberg said.

Cuomo is still getting good numbers for his handling of the pandemic. According to the poll, voters by a 51-32 percent margin approve of his overall efforts. Sixty-six percent approve how he managed vaccine distribution, 60 percent like how he kept New Yorkers informed and 54 percent say he appropriately opened the state back up.

But, 60 percent of voters do not approve of his handling of nursing homes during the pandemic that took hold in March, 2020 and is just beginning to relent.

“When it comes to the pandemic, voters still largely give Cuomo strong grades, except for nursing homes,” Greenberg said. “When it comes to answering questions about how he handled nursing homes during the pandemic, voters say nearly three-to-one – including Democrats, 49-30 percent – Cuomo did a bad job. More than half of New York City voters and two-thirds from upstate and the downstate suburbs agree that he did a bad job.”

According to the poll, Cuomo’s 45-47 percent favorability rating is little changed from 44-48 percent last month. His job performance rating is negative 41-56 percent, from 42-55 percent in May.

Of the issues New Yorkers would like to see state government address, 32 percent say crime is a top priority with 95 percent of the respondents saying it is important or very important.

“Each of the five issues Siena asked about – crime, education, infrastructure, economic equity, and racial equality – was seen as very important by at least half of voters, crime and education by at least three-quarters of voters,” Greenberg said. “When asked which issue should be the top priority of the Governor and lawmakers, crime was the winner among all voters as well as with voters of every party, region and gender. Racial equality was the top issue for Black voters, while education was tops with Latinos and voters under 35.”

And, New Yorkers, by a count of 80-12 percent, think the phrase “each person shall have a right to clean air and water and a healthful environment” to the state Constitution.

The Siena College Poll was conducted June 22-29, among 809 New York State registered voters. It has an overall margin of error of +/- 4.1 percentage.