OD deaths on track to break another record in Albany County 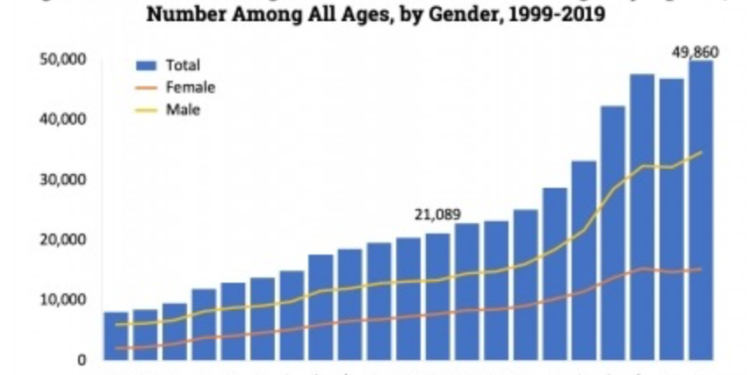 ALBANY — It could be an ancillary ramification of the pandemic or just a sign of the times, but opioid deaths in Albany County are on track to break another record.

County Executive Dan McCoy, during a press conference last week, said there were 37 deaths attributed to opioid overdose through the end of May with opioids suspected to play a role in 13 more unexplained deaths.

“I watch family and friends who have addiction issues, who have fought this and for whatever reason this [pandemic] has rocked their world so if you know anyone who has been sober reach out to them and make sure they are OK,” McCoy said. “Unfortunately, what is going on is not good and it is not just in this county but across the state and across the nation.”

Many of the deaths involved fentanyl, a powerful synthetic opioid that is often mixed with drugs like heroin, methamphetamine and cocaine. Fentanyl, like other opioids, is used medicinally for treating pain but it is illicitly, and improperly, manufactured for sale on the street and the consequences can be dire.

The cost of production compared to the intensity of the “high” is cheap, making it a desirable additive for those selling the drug but the user may not know they are taking a stronger drug and their bodies may not be able to handle such a powerful dose, leading to an overdose. Fentanyl is 80 to 100 times more powerful than morphine.

An overdose occurs when a person’s breathing slows, or stops, decreasing the amount of oxygen that reaches the brain. Hypoxia can lead to a coma, permanent brain damage and death, according to the National Institute on Drug Abuse.

More than 81,000 drug overdose deaths occurred in the United States in the 12 months ending in May 2020, the highest number of overdose deaths ever recorded in a 12-month period, according to recent provisional data from the Centers for Disease Control and Prevention. More than 70 percent are attributed to fentanyl.

“The disruption to daily life due to the COVID-19 pandemic has hit those with substance use disorder hard,” said CDC Director Dr. Robert Redfield. “As we continue the fight to end this pandemic, it’s important to not lose sight of different groups being affected in other ways. We need to take care of people suffering from unintended consequences.”

The opioid epidemic was accelerated by the COVID-19 pandemic, which forced people into isolation and cut off many recovering addicts from their support groups. There was widespread economic uncertainty and uncertainty about life as we know, or knew, it.

“Unfortunately, many fell back into the bad habits they had before they got help,” McCoy said.

McCoy said he will reconvene the Opioid Task Force he formed in 2016 to address the spike in OD deaths and to revamp education and prevention efforts. He called on Gov. Andrew Cuomo to sign a bill that would ensure all money from legal settlements with companies that legally produce opioids be spent on addiction related services.

He also said insurance companies are making it harder for people who are seeking treatment for addiction.

“Before, someone could go away and get away from their environment for 30 days and then do another 30 if needed but now the insurance companies are making it hard and some are lucky to get three or 10 days and you are not going to recover in 10 days,” he said.

LETTER to the EDITOR: We deserve to know where candidates stand in Colonie