North Colonie mourns, celebrates one of their own (w/ photo gallery) 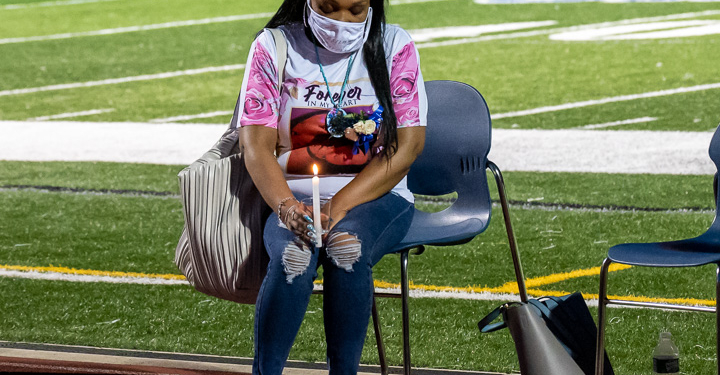 Family members, classmates and school and governmental officials spoke of an intelligent, kind, fun-loving young woman with goals and plans and tried together to make sense of the incomprehensible.

Tareen Lynch-Greene thanked the community for supporting her family through its most trying time and said there are plans to create a scholarship fund in her daughter’s honor.

“This is the hardest thing I have ever had to go through, and I want to thank everyone for their support,” she said through tears to a crowd of more than a 100 people all holding candles at the Shaker High football field.

Greene’s brother, Isaiah Greene, said he was proud of his little sister and remembered how she used to bribe him with hugs when she wanted him to take her somewhere, usually the ice cream shop. He remembered the day she died.

“On the way to the hospital, I figured everything would be fine. At worst, she’ll be paralyzed,” he said. When he learned she had died, he said he had “never felt such sadness and rage.

“She saw me as an amazing big brother and I saw her as the best little sister anyone could ever ask for. I miss her so much.”

Greene’s older sister, Elijahnae Greene, thanked everyone for the support and she hopes the killing will act as a wakeup call.

“She was so full of light and energy and I’m just going to miss this kid so much and if there is one thing I have to say, my sister’s life was not taken in vain. My sister’s death was a revolution, and hopefully it has some impact and will bring the gun violence slowly and eventually ending in Albany,” she said. “My sister was a great kid. Don’t listen to any other narrative. It’s false. She was not a fighter, she was not a brat. We are suburban kids. We like Starbucks. We went to Shaker.”

Greene was shot on Wilbur Street, near Phillip Street about two blocks east of the Governor’s Mansion, on May 24. Police received a number of calls around 9:25 p.m. about gun fire in the area and shortly after, staff from Albany Memorial Hospital notified police of a gunshot victim in the Emergency Room. Greene was later pronounced dead.

Albany Police Chief Eric Hawkins said there was a “social media meet” having to do with Facebook Marketplace. Greene was in a vehicle with two adults. The other party included two or three men and for reasons not known at this time, they opened fire on the car with Greene inside.

Any life cut short for any reason is tragic. The heartbreak, disillusionment and a host of other emotions are multiplied when one is taken in such a seemingly senseless manner.

North Colonie Superintendent Joseph Corr said the vigil was a time to pause and reflect on a profound loss, but also to “celebrate the life of a daughter, sister, friend and student.”

“This evening we will light candles to shine brightly in the early evening. Throughout the world lighting candles is an important symbol. We light candles for different reasons. Some seek to shine a light through darkness. Others use it to reflect, pray, reaffirm promises and commitments, remember the loved one or express gratitude for the blessing of a life,” he said. “It is possible and more than OK to feel more than one of these emotions, or all of them at once. You may laugh and cry, be joyful and sad and fell angry at loss and grateful for the all to brief gift of a beautiful life. The important moment is that our candles and the light they create will connect us as a community in celebration and remembrance of our Destiny.”

“It’s funny because we are like complete opposites. She was outgoing and knew everyone and was friends with everyone and I was the opposite of that coin. Whenever I saw her in the hallway we always hugged and she always stood up for me,” said her best friend Jaicha Rivera-Leal, a student at Shaker High. “We used to count down the years we knew each other and this year would have been 13. But I’m don’t want to say ‘would have been’ because I’m not going to stop counting because she is never going to leave me – my heart or my head. Destiny, I know you hear me and I’m still there for you and I love you.”

There have not been an arrest in the case but police are actively working a number of leads. There have been nine fatal shootings in the City of Albany in 2021 with six in May. Greene was the second teen. On May 3, an 18-year-old Albany Leadership Charter High School for Girls senior was shot and killed on Essex Street. She was not the target of the shooting. A 23-year-old was killed on Jan. 11, a 35-year-old on Jan. 30, a 28-year-old on March 9, a 51-year-old on May 10.

Anyone with information is asked to call the Albany Police Detective Division at 518-462-8039. Anonymous tips may also be submitted to Capital Region Crime Stoppers online by visiting www.capitalregioncrimestoppers.com or downloading the free P3 Tips mobile app.

A GoFundMe page has been established to help the Greene family with a portion going towards the scholarship fund.