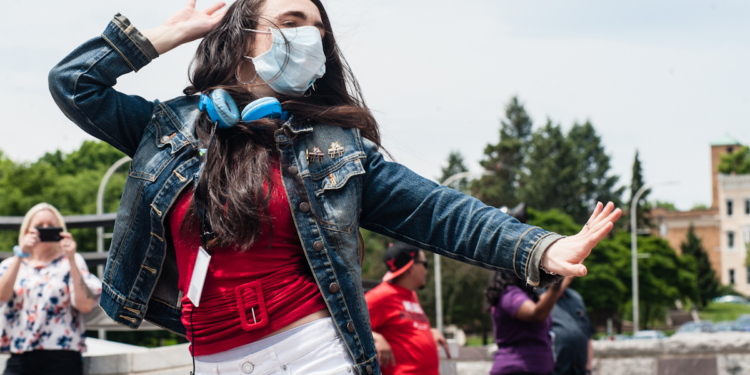 ALBANY — The Memorial Day Weekend weather left something to be desired for outdoor lovers in need of sun, fun and lively music, but that was resolved once the Empire State Plaza stage hosted Alex Torres & His Latin Orchestra on Wednesday, June 2.

Before the pandemic, the plaza would host several events in the shade under The Egg. Such a comprehensive schedule of events may be few this year even with mask restrictions lifted. It takes too much time for most festivals to put together a string of shows. But, live music is popping up.

Alex Torres & His Latin Orchestra hit the Empire State Plaza stage as part of NY PopsUp!, an expansive festival consisting of hundreds of performances throughout the state. It is intended to revitalize the spirit and emotional well-being of New York citizens through the energy of live performance. The programming for NY PopsUp is led by the interdisciplinary artist Zack Winokur, in partnership with a council of artistic advisors who represent the diversity of New York’s dynamic performing arts scenes and artistic communities.

NY PopsUp launched in February and will run through August closing with both the 20th anniversary of the Tribeca Film Festival and the Festival at Little Island at New York City’s Pier 55.

Alex Torres & His Latin Orchestra provides the soundtrack to many in Albany. Since forming in 1980, the award-winning 12-piece orchestra has performed at hundreds of festivals and performing arts centers, playing its original blend of Afro-Caribbean rhythms such as salsa, merengue, cha-cha and Latin jazz.

The group has performed for President Bill and Hillary Clinton at the New York State Democratic Convention and for Governor’s George Pataki and Eliot Spitzer’s for their respective Inauguration.

The lunchtime crowd at the plaza appeared to enjoy the show. While many remained in their seats to enjoy the music. Others took the opportunity to move and sway under a sun that decided to finally return to the Cap City.