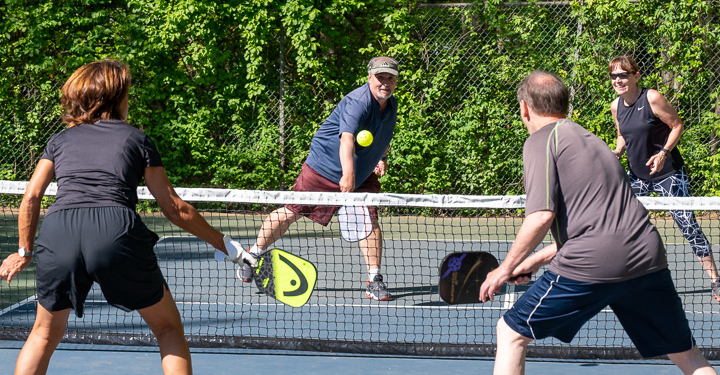 COLONIE  It was probably the most civil, polite group of people who has ever come before the Town Board to air  grievances.

But, they made their point loud and clear as they complimented the elected representatives for their dedication and condition of the town — they love their pickleball and want more courts.

A plan to build more of what are basically scaled down tennis courts at the Kiwanis Pocket Park on Route 2 to accommodate the local enthusiasts of the country’s fastest growing sport fell through and members of Colonie Pickleball Club are scrambling for places to play.

Right now, there are just four courts dedicated to the sport at the Milton Pocket Park off Rapple Road in the Village of Colonie. There are tennis courts with pickleball lines drawn at Locust Park and Cook Park but it’s not the same. Close, but not the same.

“We need your help to deliver on a commitment made to the seniors of this community,” Andi Schneiter, co-chair of the CPC Welcoming Committee told the Town Board. “We entrust you to keep the community vibrant, just like you do for the young families.”

Taking a break from playing an upbeat pickleball match at Milton on Sunday, May 16, she said right now the club has 140 members and there is a waiting list because court time is hard to come by in town.

“The organization represents a diverse and accomplished group of citizens in town. We enjoy an active recreational  outlet and strong social outlet that is not replicated in any sport,” she told the board. “As accomplished, active and retired people, finding purpose, joy and a social connection is so critical to our physical health and mental well-being. The benefits to a person and to a community are enormous.”

The sport is a mix of tennis, badminton and ping pong. It is played by hitting a whiffle ball over a net with a paddle over a net that bisects a 44-foot court. Seven-foot on either side of the net is the “no-volley” zone, making the playing area smaller so older, less athletic people can cover the court. Plus, a whiffle ball doesn’t go fast regardless of how hard it is hit, at least compared to a tennis ball, but there is more athleticism required and more of a cardio workout than standing at a ping pong table.

The ease of play — in addition to the social aspect — is one reason the sport is so popular.

“When I retired a few years ago I wanted to check out the sport I have heard so much about. After the first day of playing it I was hooked. Not only because it was fun and relatively easy to learn but the people I met were welcoming and supportive,” said Agnes Philips, who now plays with her 18-year-old son. “It has provided me with a social community with the added benefit of staying active.”

Schneiter, citing statistics from the latest U.S. Census, said the town’s population grew by 2.3 percent from 2010 to 2020 but the number of people 55 and older grew by 28 percent with the ranks of those 65-74 years old growing by 57 percent.

Supervisor Paula Mahan said the plan to build courts at the Kiwanis park ran into problems with parking and some land ownership issues. The bottom line is the town can’t build eight courts there as planned, even though work on the courts had already started.

Now, the town is focusing on building six courts where the tennis courts are located at the Mohawk River Park and Pool off Route 9 and have two courts still dedicated to tennis. The location would work, Mahan said, because the town owns the entire park, the tennis courts need to be fixed up anyway, there is adequate parking and there are bathrooms at the Latham Lassies softball facility when there are games going on and town bathrooms at the pool complex and down the hill near the playground and pavilions. The Kiwanis court plan would not include bathroom facilities.

“Our plan has always been to build these pickleball courts,” she said. “We are going as fast as we can. It’s not like we can wake up and build pickleball courts. There are processes we have to follow and bidding has to take place.”

She said the change of plans, while disappointing to the pickleballers in the short term, could be a blessing in disguise because the town would have full control of the courts rather than ceding some of it to the Kiwanis.

After these courts are built, she said, the town is eyeballing more courts at the West Albany Pocket Park to spread them out in different parts of town.

“Anyone can pick it up of any age and any physical condition,” said Frank Lee, who was in between games at Milton Park. “It’s good exercise for people and they get a chance to get out and socialize. We have people 60, 70, 80 years old who come out every day.”

According to the USA Pickleball Association, the game has been around since 1965 but has exploded in recent years. In 2020, there were 4.2 million players in the U.S., an increase of 21 percent from the year before. Of those, 2.2 were casual players with the rest core players, those who play eight or more times a year at all different levels from beginner to intermediate to competitive. Of the core players, 60 percent are 55 or older.

“People of our age, our generation, were always outside. The younger generations are all inside playing video games,” said Kevin Smith, pointing to an empty basketball court at Milton Park.