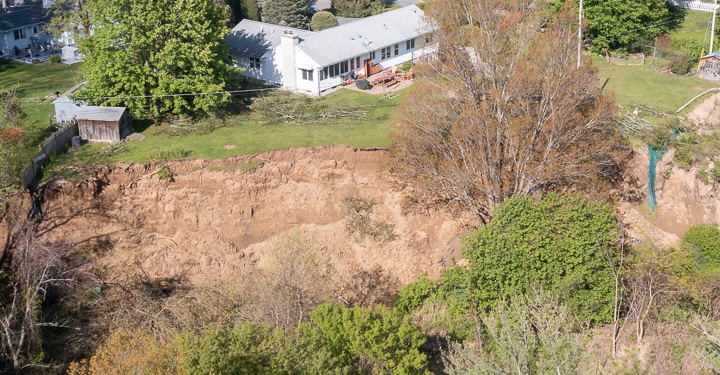 ELSMERE – A landslide at the end of Groesbeck Place chewed through backyards and forced National Grid to move power poles to keep the lights on.

Sometime between the Tuesday night and early Wednesday morning, May 11 and 12, a 400-foot swath of Normanskill clay broke loose behind the neighborhood. No houses were damaged, but the slope that used to roll 40 feet down to a small creek feeding into the Normanskill is now a cliff.

“We were going to put a platform in our backyard so we could enjoy the beautiful view back there,” a homeowner, who didn’t want their name used, said. “Now I am glad we didn’t.”

Town engineers are assessing the landscape to determine the stability of the cliffside that now remains.

National Grid crews worked past midnight on Wednesday, severing power lines running along the cliffside to temporary poles erected in front of neighborhood homes. According to the power company, none of the approximate 12 households lost power, but the position of the utility poles was a concern.

“Right now, we’re okay,” said Patrick Stella, public information officer for National Grid. The power company may have to redesign how it runs its power lines through the neighborhood, he said. “We’re just going to have to wait and see.”

The cul-de-sac neighborhood has already experienced congestion from curious visitors. With crews working within the neighborhood, the town has asked the public to stay away.

The area around the Normanskill and the streams that feed into it are susceptible to landslides. One of considerable note impacted the community after more than 100,000 cubic feet of hillside crumbled into the ravine in 2000 and closed a portion of Delaware Avenue.

State engineers attributed that landslides’ cause to “a massive soil failure.” It forced commuters to take alternative routes as the four-lane stretch of Delaware Avenue was reduced to two lanes. It took six months to stabilize and clean up the area at a cost of more than $25 million.