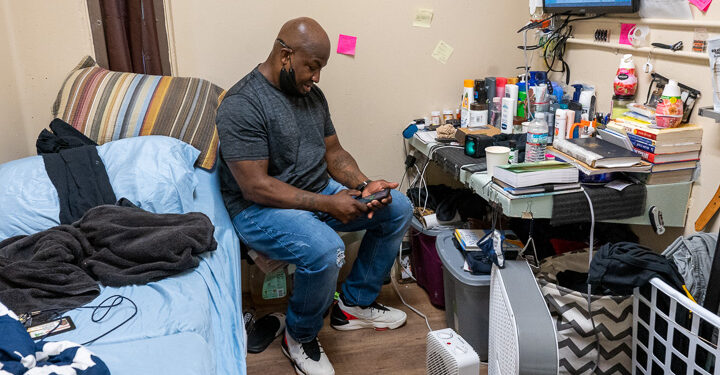 COLONIE — Hope. Without it nothing else matters.

The Sheriff’s Homeless Improvement Project celebrated a year of giving the previously homeless a roof, food, access to other basic services, leads on steady work … and some hope.

“I can’t thank this place enough. I never thought I would be coming to a jail for help. But when I came here I was homeless. I was just existing on the streets and the staff gave me direction. Now I have a job. I go to work every day,” said a resident of SHIP, Alexander Chico. “I’m from the other side, I came here with the clothes on my back and today I try to figure out what to wear in the morning. It may not mean that much to most people but it means something to me.”

He said relations with his family have improved, his kids call him and his mother is happy with the direction his life is now headed. He is saving money and looking for an apartment on his own.

Troy Carlson is a recent “graduate” of the program. He is expecting to finish up his associates degree in August with plans to enroll in a bachelors program to eventually become a nurse.

“I was an addict. I had mental health issues. I was living on the streets. When I came here, I felt safe. My daughter knew I was safe when I was here. I was allowed to work on my mental health and they allowed me to go to rehab,” he said. “I’m grateful I had this opportunity. I needed that eight months. It may seem like a long time but I needed it to get my life in order. They gave me a chance. We need people to help us and guide us along sometimes.

Over the past year, 62 people moved from the streets to an underutilized wing of the Albany County Correctional Facility on Old Albany Shaker Road in Colonie. The cells serve as rooms, and the common areas have furniture and television sets and the residents have access to computers and a host of services to help get them back on the right track or on the right track for the first time.

“I always thought if I ever hit the lottery, one of the first things I would want to do is cure homelessness,” said Sheriff Craig Apple, who called the one-year celebration on Tuesday, April 20, one of the best days of his career. “We wanted to create a place we could put people in, have them feel safe and get them some training and get a job and be able to go out and sustain a lifestyle we live every day — have a home, have a car and pay all the taxes we pay in the great state of New York.”

On its face, it’s a simple formula. Take someone living off the streets, give them basic life lessons, give them some basic life skills, point them in the direction of a job and send them on their merry way.

“We are giving them support they may never have had before. Every person in this crowd has had support, from a family member or a counselor or someone. A lot of these people have never had support,” Apple said. “Their moms or dads have been in and out of jail and that drives recidivism. We want to break that cycle.”

But for this particular program to work as it should, it took resources and a host of different public and private entities coming together and working towards the common cause. Apple, though, is one of the most popular elected officials in the county, liked by both sides of the aisle, and it didn’t hurt to have a solid plan.

It will save the county money by putting to good use an underutilized section of the jail and not having to house homeless people in motels or hotels. The worth of turning a homeless person living on the streets without hope into a productive member of society is incalculable.

Unions have recruited residents into their apprenticeship programs and private companies have hired residents with confidence, knowing they are committed to living life as a productive members of society. And private businesses and other institutions are getting on board to help out.

“I’m here to thank you. SEFCU’s purpose is to change lives. That is why we are in business. And there is no better definition to changing lives than what the sheriff has here,” said Michael Castellana, present and CEO of SEFCU, who brought a gas grill as a housewarming gift for the program. “This is a fantastic opportunity for them to go from under that bridge to  the next chapter in their life and it would not happen without the partnership that is happening here. We don’t need huge numbers we need just one. What is the price tag for changing that one life?”

Castellana said he is donating $20,000 out of his own pocket to help those transitioning out of SHIP pay for the rental deposit on their own apartments.

“For most of us, we probably don’t think about it much, but for them it could be weeks or months of work for them to get that deposit,” he said. “Hopefully that $20,000 will support some people as they make that transition and when that money is gone, more will come in.”

At the same time, Hudson Valley Community College President Roger Ramsammy said he would launch a scholarship fund worth $1,000 per student for residents looking to attend his college.

“Hudson Valley is a community college so we serve the community in any way we can,” he said.

The stigma attached to homelessness, too, is not as vitriolic as it once was.