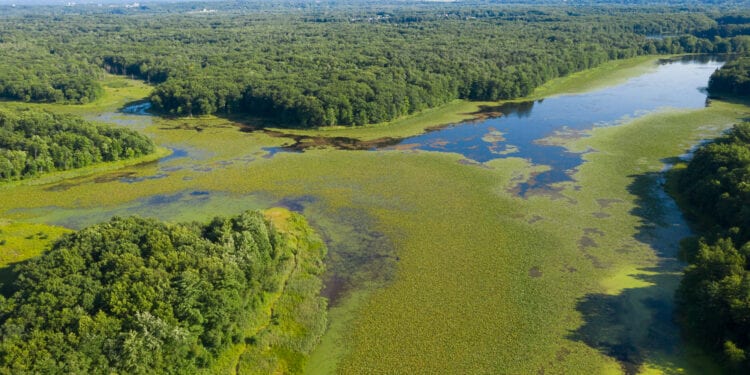 COLONIE — Should the town hold on to the Stony Creek Reservoir or sell it to the highest bidder?

But, it might not be that cut and dry because supplying clean, drinkable water to a town the size of Colonie is a complex, arduous task that must take into account fluctuating supply, different levels of use and an aged infrastructure.

Conceivably, the town could sell the land and hold onto the water rights, donate the land or sell at a reduced rate to an environmental group to allow use the pristine chunk of real estate or it could just keep the entire 963 acres — with 365 acres of water — in Clifton Park as a backup water source like it has since 1953.

The town, though, hasn’t tapped into that source of water since 2004, said Superintendent of the Latham Water District John Frazer during a two-hour information session with the public to discuss what to do next.

The Latham Water District was established in 1929 and today has 55 employees. The primary source of raw water is the Mohawk River and five wells along Onderdonk Avenue. The treatment plant has the ability to move 30 million gallons of water per day through 437 miles of pipe to about 25,500 customers and 4,100 fire hydrants throughout the district. The average daily water usage is about 10 million gallons per day. Last year the highest daily total came in June when customers used 23.2 million gallons.

In other words, the town has had enough raw water and treatment capacity to meet daily needs without tapping into an emergency source of water.

There are pros and cons to each scenario described above when it comes to the Stoney Creek Reservoir and the town will spend the next 18 to 24 months gathering information before making a decision. Of course, by that time, there will be a new administration and possibly a new political configuration of the Town Board so while the decisions makers may change, the data will not.

From a water supply standpoint, the reservoir is obsolete, Frazer said, because of a new interconnect agreement with the City of Albany, where each municipality has agreed to sell treated, potable water to the other in case of an emergency. Those two access points, one at New Karner Road and one at Albany Shaker Road, have the capacity to supply the town with 12.4 million gallons of water per day in the event of an emergency, he said.

The interconnect is operational, but the final bill has not been paid so technically it is still not 100 percent complete. A state grant covered 60 percent of the $3.2 million construction cost and the town and city split the remainder. The town has not yet had to buy water from Albany, but did supply the city when it was running short.

If the town did need water, Frazer said, the cost will fluctuate based on Albany’s budget and the town’s usage. If, for example, the town needed water last week, it would cost about $5,700 to deliver the maximum amount, one week of that same 12.4 million gallon per day rate would cost $43,000 and for a month it would cost $235,000.

A scenario leading to Colonie needing that much outside, emergency water for a day let alone a month has not happened in decades.

Water piped from the Stony Creek — from the dam under the river to Niskayuna and then up River Road to the treatment plant, is raw. One advantage of having the emergency interconnect with Albany is the water purchased is already treated.

“One of the advantages of this connection is it is finished water. It is deliverable right now unlike any of our other supplies that has to be treated, the wells, the river and the Stony Creek Reservoir would have to be treated before it is usable,” Frazer said. “It’s finished water that can go right into our system and to your homes.”

The town recently put out a Request for Proposals for the sale of Stony Creek with a minimum bid of $5.1 million. In there was a deal in place to sell all the land and the water for $8.7 million but that fell through. There was another near sale to Clifton Park in 2009 for about $3.2 million but the town at the time was asking between $8 and $9 million and the deal fell through.

If Stony Creek is sold, the money generated and the money saved in operational costs, about $224,00 a year, could be spent on other, needed infrastructure improvements across the district — as per state law, the money will stay in the Water District rather than the town’s general fund.

“It would free up capital for other projects the district would like to undertake, especially replacing water mains, Frazer said. “Of the 437 miles of pipe about 60 percent is old cast iron installed prior to 1976.”

Another advantage is the potential to modify state Department of Health regulations that prohibit the water and land surrounding the water for any use other than a source of water. It is a pristine chuck of undisturbed land in the heart of one of the Capital District’s largest suburbs and could, for example, be used for recreation.

In addition to financial and practical benefits of a sale, Frazer said the reservoir was showing it contained high levels of Total Organic Carbon, which is difficult to treat and one reason the town has not tapped into the reservoir since 2004.

In February, the Clifton Park Town Board briefly expressed a continued interest, according to the Community News, but a passing interest was the extent of the discussion. A spokeswoman for the Open Space Institute said that organization is working with Clifton Park officials to explore options.

To kick off a what would be a lengthy process of modifying the state regulations requires a letter from the town and that has not yet been sent.

The RFP is returnable on June 4, which sparked criticism from the public, namely the grassroots group SAVE Colonie, a Partnership for Planning, that a sale was imminent. Supervisor Paula Mahan, though said, nothing would be done before all the information is gathered — 18-24 months from now — and she would not handcuff the future administration with a decision of this magnitude.

“We are at the beginning stages. This is a very long process. The composition of the board may not be the same. We will not commit until the process is completed and we will not bind a new administration to this,” she said. “Throughout the process, which is 18-24 months, there will be an extensive amount of data gathered. It is important to have the facts out there. Right now, there are a lot of misinformation out there.

“Do we need both? Is it beneficial to keep both? We have to let the process go over the next several months.”

Following a 30-minute presentation on Tuesday, April 20, there was a 90-minute question and answer period and most of the questions, posed by members or affiliates of SAVE, highlighted the shortcomings of selling the reservoir.

Aimee McKane, a member of SAVE, asked what would happen if a drought hits. She said it is more likely given the unpredictable climate change and it would not be exclusive to the Town of Colonie but rather impact the entire Capital District.

If drought conditions do present themselves, she said, the town would be better served having its own water source rather than relying on another municipality.

“We will be competing with the same water sources Albany will use,” she said. “There are assumptions aplenty, and I am concerned about not seeing any projections of what these droughts will mean. It may make sense to sell it but the data is not there.”

Frazer said the worst drought of our lifetime came in the 1960s and the Mohawk River was able to keep up with Colonie’s demand. The town, he said, is permitted to pipe about six million gallons per day from the reservoir with one million gallons required to go downstream. It is less than half of what the Albany interconnect could provide but did say the city is not required to supply water and the town is not required to supply water to the city.

Susan Weber, a member of SAVE, said this is the “most consequential decision” the board will make in a decade, and questioned the water quality of the Mohawk River and said it is only getting worse.

“Just in the past 10 years there have been problems like chemical discharges including nuclear discharge from KNOLLS, and raw sewage discharges and we are not always informed of these discharges,” she said. “There has been an exponential increase in fecal coliform in the river from 2015 to 2020 it has shot up incredibly. This is a little scary and it is worse after rainfalls.”

Frazer did not dispute what is in the river but said the comprehensive, state-of-the-art treatment process conducted at the Mohawk View facility, removes all the contaminants and the water that comes out of a tap exceeds state standards.

Some questioned the deal with Albany and the fact there is not a set rate for Colonie to purchase water from the city and Frazer conceded that the town is at the city’s mercy for the rate it sets but, since the agreement is reciprocal, there are good faith and practical reasons for not gouging.

The another questions, Frazer said the sale could not go to a permissive referendum because the land is owned and being sold by the Latham Water District. As such it is not town property, the sale of which would have to go to a referendum.

The issuance of an RFP, with a return date, did not satisfy some in the audience that the Mahan administration was not going to sell the reservoir before her term is up at the end of 2020.

“Generally you don’t issue an RFP until you know what you want and you don’t put an RFP out there until you know your asset and what I am hearing is a lack of data and a lack of assessment,” McKane said. “The Process that will take 18-24 months is neither here nor there, the point is the RFP should not have gone out until the town had a good sense of what their options were.”

“The bottom line with the reservoir is can the water be treated and used and do we need it,” Mahan said. “John (Frazer) is an engineer and has worked for the water district a long time. An independent engineering firm recommended the interconnect with Albany and the main benefit is that it is treated. This is what we are doing, we are not trying to pull the wool over your eyes.”

SPOTTED: Guilderland gets by Shen; will meet Shaker in championship