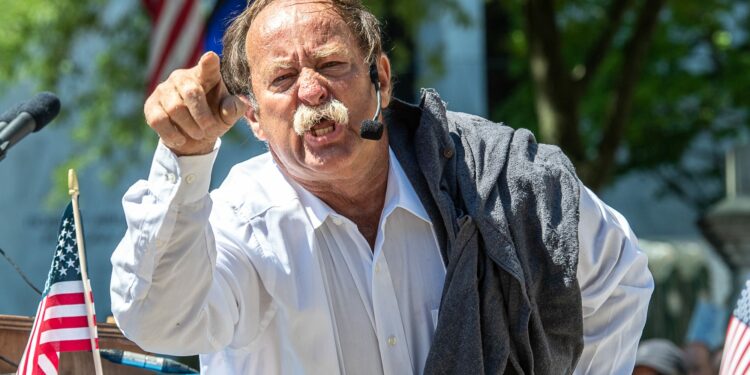 William Tryon speaks at an August, 2020, Back the Blue rally outside the state Capitol in Albany (Jim Franco/Spotlight News)

A Selkirk man was the latest arrest for his involvement in the “riot and assault” on the U.S. Capitol on Jan. 6.

The charges against William Tryon, who spoke at a Back the Blue rally outside the state Capitol in August, 2020, and was a counter-protester at Coccadotts Bakery during a Black Lives Matter rally in Colonie, are not known at this time.

“We will continue to coordinate with our colleagues at the FBI Washington Field Office and the U. S. Attorney’s Office to bring to justice anyone who broke the law that day,” said the Albany FBI in a statement. “We remain grateful to the public for their invaluable assistance in this investigation and continue to encourage anyone with information to call 1-800-CALL-FBI.”

Tryon’s arraignment was scheduled for Tuesday afternoon in federal court in Albany.

In a video of the Jan. 6 riot posted on YouTube, Tryon was seen sitting outside the Capitol in Washington wiping his face and holding a cell phone and a U.S. Flag.

“This is our Capitol building all we want to do is enter and tell our representatives we want our country back. We are not going to take this,” he told the person who made the video.

“Those two boys deserve what the boys in Normandy paid for,” he said referencing two people, presumably young rioters, not seen in the video. “This is nothing so far. This is your freedom.”

He said he got pepper sprayed as he entered the Capitol and got hit with batons “two or three times.”

Chants of USA were heard in the background and the 11:14 second video showed up-close clashes between rioters and Capitol police.

Scores of people were arrested for their role in the riot that drew the world’s attention to Washington. Rioters carrying American and Trump 2020 flags stormed the Capitol protesting Donald Trump’s loss to President Joe Biden in November. More than 140 people were injured and five died.