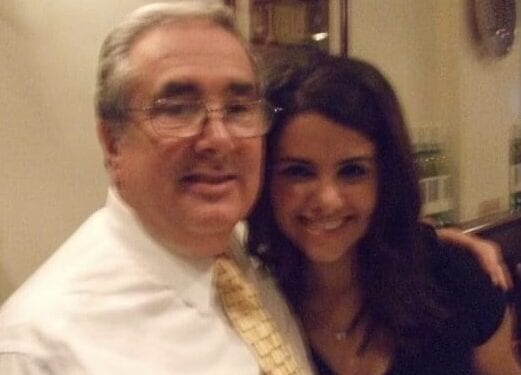 COLONIE — The daughter of who was one of the most powerful men in state government — as popular as he was controversial — is running for Town Board.

Alexandra Velella, a 33-year-old attorney and a Republican like her father, was making headlines before she could even walk or talk. In 1987, after he had won a nasty Senate race to represent the district that comprises parts of Westchester County and the Bronx, Guy Velella admitted to fathering a daughter out of wedlock with a longtime Albany mistress and that he had made financial arrangements to take care of the little girl.

He was elected a year later and every two years after that through 2002. He also stayed involved in the child’s life, attending school activities, dance recitals and other things typical of a traditional family.

“Both of my parents were very much involved,” she said of the senator and her mother, Barbara Drago. “I wasn’t hanging out with him every day, but he was 100 percent there for me.”

Guy Velella was elected to the Assembly in 1975 and 10 years later he was elected to the state’s upper house where he acquired the most coveted chairmanships. As chair of the Republican Senate Campaign Committee, he was one of its most powerful figures in Albany, New York City and across the state with the ability to funnel millions into select political campaigns.

Drago, an former employee in the SUNY system, is has long been involved in the Albany County Women’s Republican Club.

“He did a lot of great work for the state of New York and the people in his district and I am proud to follow his footsteps into elected office, even if it took me a few years to do so,” Alexandra Velella said. “He said all along I should go to law school and he always encouraged me to go in this direction, even at an early age. I’m excited to be doing this and starting a little bit of an adventure.”

While Guy Velella may not be as well known in upstate, his name still resonates downstate and at her first law firm in the Bronx, and even her most recent, Schwab and Gasparini, Alexandra Velella said associates notice her last name and often ask if she was related.

“Everyone seems to have a story about him, either of him helping them out or just meeting him. One guy, his dad was a small business owner in the Bronx community, and he said my dad would always come in and talk to him and always bring him pastries and they would share stories.

“My dad was engaged in the community and that is the key to making a difference.”

Guy Velella, the longtime head of the Republican Party in the Bronx, where politics is a blood sport, was known for his charisma and unapologetically bringing state funds and projects to his district. That is part of the reason he was elected for more than 30 years even though his electorate consisted of three times as many enrolled Democrats than Republicans.

He was even re-elected to the Senate in 2002, after getting indicted on a 25-counts of bribery and conspiracy related to taking kickbacks for awarding lucrative state contracts. He later plead guilty to accepting a $137,000 bribe and was sentenced to a year in jail. He served just three months, but his early release caused such an uproar that he was sent back to jail to serve another three. In all, after reaching a plea deal that in part gave his father, law partner and co-defendant immunity from prosecution, he served 182 days.

Unflattering headlines became a norm for Guy Velella, from taking contributions from the Genovese family, who were known mobsters, and once penned a letter asking a judge to go easy on a known mafia members convicted of racketeering. And yet he still was elected time and again.

In 1987, news of Alexandra Velella broke, but a year later he handily won a re-election bid, despite Democrats using his own campaign literature criticizing his opponent’s lack of sexual morals and touting his own family values against him. At the time, the Senator was married with a family living downstate.

At the time of his death of inoperable lung cancer in 2011 at the age of 66, politicians on both sides of the aisle made mention of Guy Velella’s ability to remain focused on his district despite everything else, either self-inflicted troubles or  that was going on at the time.

“I think Senator Velella taught us all that political power and clout come to those who work hard and are popular in their districts,” said Jeff Klein, a Democrat who took over when Velella stepped down in 2004 as part of his guilty plea. “He always listened to people and not the political elite.”

Alexandra Velella is well aware of her father’s history, but chooses to take other lessons from his long and colorful career.

“He taught me the importance of dealing with constituents and to always know what is going on in his district and the community and being responsible to people and meeting their needs,” she said. “It’s a bit overwhelming and exciting and I am looking forward to it.”

The 33-year-old grew up in Albany and moved downstate to attend Manhattan College and Brooklyn Law School. She was working in a New York City law firm, but returned to the Capital District in March, 2020, as the pandemic began ravaging New York City.

She make no qualms about her conservative stance on the issues and said there are many young conservatives who need a voice.

“Coming up from the city to this area as a younger conservative, I have a different perspective for other people who might be involved in local government and politics in general, she said. “In this day and age, people are way more into politics than they were when I was growing up. I look at kids now who would have been watching MTV and they are watching what happens politically and I think it is great. I see a resurgence of younger conservatives and that is a lot of the reason why I am choosing to do this. The 2020 elections were a hard hitting loss for conservatives and there is a need for young people to get involved on a local level.”

Car hit with gunfire on Sparrowbush Road in Colonie