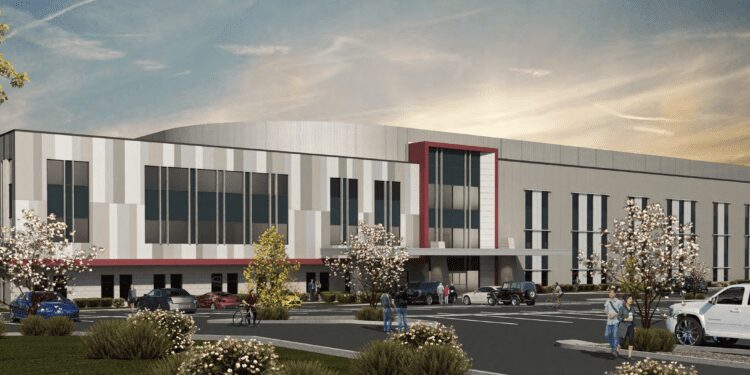 COLONIE — The Planning Board moved forward a 242,630-square-foot medical office building on Autopark Drive at its last meeting, but is requiring the developers to make an extra presentation before it addresses final site plan approval.

The main issue is, if the project were to proceed, it would land lock a 2.4-acre parcel of land at 4 Autopark Drive that is currently home to a large warehouse. Columbia Development is proposing to subdivide the land and on the 18.5-acre parcel build the three-story structure where some 750 employees — 400 in the office section and 350 in the medical section — will work.

While the board doesn’t necessarily have to address the landlocked property at this time, since the only application for development is the three-story building on 6 Autopark Drive, but access to the property is at least partially contingent on what happens at the larger parcel.

An Open Development Area has been requested, which allows access to a property not directly from a town-owned road. Right now, there is access from Loudon Road but it was not clear if it is a solid driveway or if there are easements to allow traffic on the privately owned lands along Route 9 just north of the Northeast Acura car dealership.

There is a proposed stretch of vacant land along the eastern side of the proposed 6 Autopark Drive with enough land to build a road. If Columbia purchases it along with the rest of the land, it would require an easement and could cut into the required greenspace, which would require a waiver and an ODA. The greenspace issue remains if the current owner, who is not known, retains the land but it would not require an easement from Columbia or an ODA since a road would connect directly to Autopark.

Or, Columbia could grant an easement to allow access from Autopark Drive through its parking lot once it is built. That would also require an ODA.

“The owner of the property, of 4 and 6, wants to retain that parcel so it is not part of our project, which is the application in front of you,” said Richard Rosen, of Columbia Development. “We are trying to work out a way, without getting into a shared driveway, which would require an easement and an ODA.”

The developer proposes 1,284 parking spaces — with 34 handicapped and two as electric vehicle charging stations — which is less than the 1,386 required by the town and Columbia is requesting a waiver for that and for exceeding the 20-foot maximum setback.

Traffic on Autopark is not heavy, but vehicle will exit at a signaled intersection onto a busy section of Route 9.

According to the engineering firm of Hershberg & Hershberg, who presented the project to the Planning Board, the building will generate 561 new vehicle trips during the afternoon peak travel hours.

The hours of operation for the medical office space and for most employees are from 6 a.m. to 9 p.m. Monday through Friday, from 7 a.m. to 10 p.m. on Saturday and 9 a.m. to 7 p.m. on Sunday, according to the narrative submitted to the Planning Board.

The actual hours are dependent on the tenant. Rosen said he does have tenants but was not ready to make them public before contracts have been signed.

The land, zoned Highway Commercial, is within the Boght Road GEIS and mitigation fees, paid to the town to help offset costs of providing services to the project and its users will be negotiated as the project nears final approval.

The board was “reasonably pleased with the concept,” said Chairman Peter Stuto, and the concept was approved by the board. But, the developers are required to come before the board once more for an update before a final site plan can be discussed.