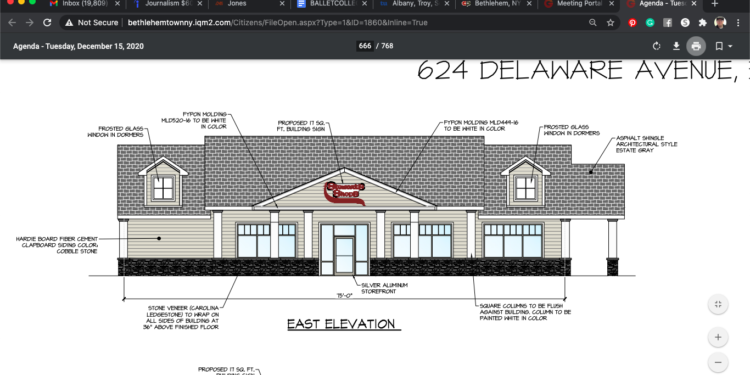 DELMAR — The town planning board received its answer on how to proceed after a Stewart’s Shops proposal briefly stalled earlier this month to revisit what was last agreed upon between the town and the convenience store back in 1998.

The Malta-based store chain introduced its plan to bring gas pumps back to a revamped store model on the corner of Delaware and Elm avenues in June. It was to continue discussing how it’s expanded footprint would comply with zoning requirements on Dec. 1. The board tabled the discussion after a local resident challenged that position with evidence suggesting gas pumps were not to be allowed.

The town approved the present-day storefront more than 20 years ago, after Stewart’s Shops promised it would go without selling gas. Though the corner lot was previously a gas station more than a decade before that, town planners steered away from bringing a second gas station to the busy intersection.

Since then, a comprehensive plan and a defined convenience store use that permits the sale of gasoline had the store chain flexing its legal right. Justin Harbinger, the town’s code enforcement officer agreed.

“As the planning board, my advise to you is, we have to follow the current zoning as it exists,” said Mark Sweeney, counsel for the Bethlehem Planning Board. The attorney prefaced his comment by defining Harbinger’s role; that of being the one official charged with the responsibility. “There is no exception. There’s no requirement here that would prevent you from doing so, nor do you have, as a board, the authority to make an interpretation differently.”

The determination brought both sides back to the original scope of last month’s meeting, which was how Stewart’s Shop could devise a way to fit a 3,975 square‐foot gable roof, concrete clapboard building for a new store. It is also pitching for a freestanding, 2,668 square-foot canopy to shelter gas pumps capable of fueling eight cars at a time.

Stewart’s has tried to draft schematics that would allow both to fit within the corner lot, factoring buffers, adequate parking and an aesthetic dictated by the town’s hamlet designation. None of the three plans it submitted do.

“That’s a little bothersome,” said board chairman John Smolinsky. “We don’t really have a plan to pick and choose from. But, we can at least express a very broad concept… to place a building up near the road.”

Stewart’s Shop has committed to its gasoline and diesel business in recent years. In January, Stewart’s spent $6.6 million to purchase Polsinello Fuel’s wholesale business at the Port of Albany. And, according to the Albany Business Review, it stands to acquire Red-Kap wholesale fuel distribution business and convenience stores before the year’s end.

Resident Peter M. Iwanowicz, who emailed the board a copy of the 1998 use variance agreement that prohibited the sale of gas, had previously protested by stating “It would make more sense and be more environmentally sustainable to set up electric vehicle charging stations there.”

Sweeney had shared that when the town rezoned the corner lot in 2005 it had the opportunity, but chose against, appending legislation that would have restricted the sale of gas.