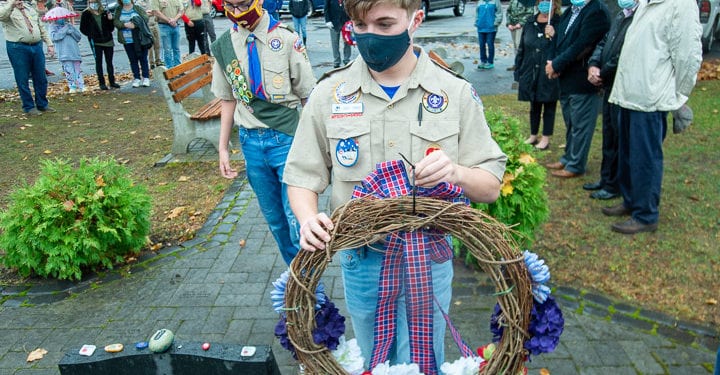 About two dozen, Boy Scouts, their families, village trustees, veterans and other officials braved the steady rain to honor our nation’s veterans.

The story of Veteran’s Day begins with the Treaty of Versailles, signed on June 28, 1919, that officially ended World War I. Actually fighting, though, stopped seven months earlier when an armistice between the Allied nations and Germany went into effect on the 11th hour of the 11th day of the 11th month, according to the U.S. Department of Veterans Affairs.

Congress officially recognized the end of World War I as Nov. 11 with a resolution passed on June 4, 1926, and on May 23, 1938 Congress declared Nov. 11 a legal holiday called Armistice Day.

In 1954, Congress opted to change the name from Armistice Day to Veterans Day in order to recognize soldiers from World War II, the Korean War and all veterans who served before and since.

SPOTTED: Colonie girls drop a heartbreaker at home to Saratoga