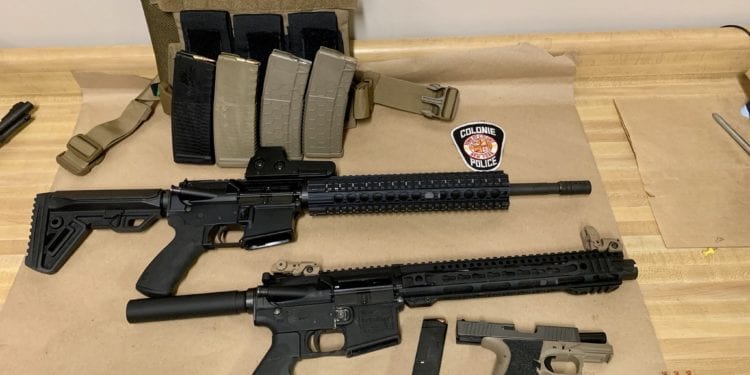 COLONIE — A 20-year-old from Loudonville faces weapon charges after a domestic incident on Clover Lane.

According to Lt. Robert Winn, the victim called her mother on Tuesday, Nov. 10, at around 6:30 a.m. and told her Alexander Alomar threw her to the ground, spit in her face and smashed her cell phone.

The mother, who lives in Bethlehem, reported the incident to police in that town and they in turn notified Colonie.

After interviewing the victim, police learned there were weapons in the home and that Alomar had allegedly made statements about plans to ambush and shoot police.

Colonie police SWAT responded to the area while investigators applied for a search warrant for the Clover Lane residence.

Alomoar does not have a New York state pistol permit and can’t legally possess a handgun in this state. The rifles and magazines are illegal to possess in this state.

Alomoar faces three felonies of criminal possession of a weapon, the misdemeanor of criminal mischief and a violation of harassment. He was arraigned in Colonie Town Court and released to the supervision of probation.

LETTER to the EDITOR: Town should retract allegiance with BLM

ON THE BOOKSHELF: New November reads to enjoy (adult)