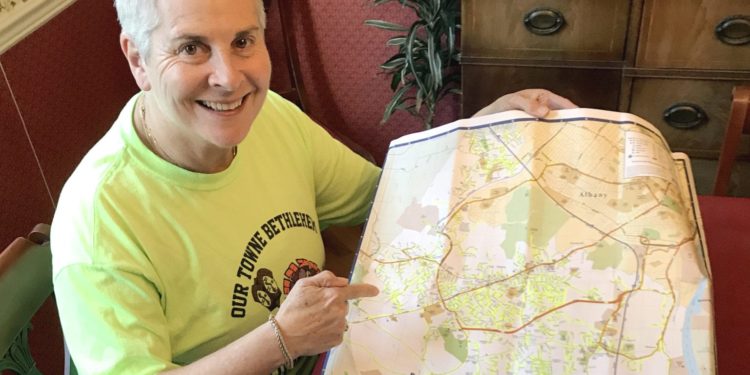 Jane Sanders holds a map of her hometown of Bethlehem. Each streak of fluorescent yellow is a street she visited on her bicycle. Photo submitted

BETHLEHEM — Jane Sanders, 62, considers herself “pretty active.” She’s an occasional hiker and likes to keep on her toes. Before her retirement in February 2019, she spent 17 years working for the Town of Bethlehem, where she spent four years as the director of Senior Services.

The Delmar resident pushed boundaries — literally — when she spent 20 days biking each road on Bethlehem’s map over the summer.

“I had this urge to ride all these roads from driving seniors to and from their appointments or shopping,” Sanders said. “I always wondered where certain streets were and where the ones I wasn’t familiar with were.”

Sanders’ mission was outfitted with her map, which had each road in the town’s boundary mapped out. After her ride each day, she would sit down and mark off the roads she took. Sanders said she would ride about five hours a day. Sometimes, she would have to bike eight to 10 miles to her starting point.

Sanders said her journey gave her something to do and a way to get fit. Despite biking hundreds of miles through the area, she never once got lost and recognized many homes from her time at work. Having broken up the town into bite-sized chunks on her map, she was able to cover a bunch of land at a time by utilizing roads that made sense for the route. Plus, because she started the journey when a lot of places were closed due to the COVID-19 pandemic, the traffic on the major roads was a fifth of what you see today.

“I was able to see places like Bridge Street in Selkirk, which is kind of out of the way and a place I hadn’t been to before,” she said. “Ultimately, I kept going until I saw a sign of some kind indicating I had crossed the Bethlehem boundary.”

Sanders will be 63 soon. She and her husband, Garry, love talking about her rides. The former outreach worker feels accomplished and now has a better knowledge of Bethlehem’s borders.

“I’ve always enjoyed riding my bike,” she concluded. “This was just a super fun way to get to know our town more and get some great exercise while doing it.”

Regional races decided as nation waits on who will be president