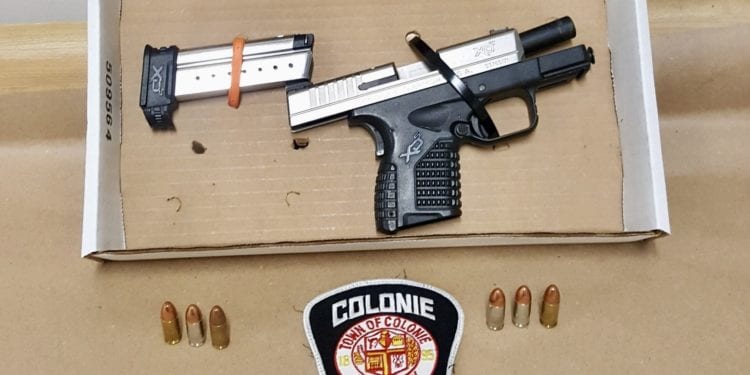 COLONIE — A man with a pending attempted murder charge out of Schenectady was arrested on Monday, Nov. after he allegedly tried to pull a handgun on two officers after a traffic stop.

According to Lt. Robert Winn, patrol officers Connor Anson and Ryan Howe stopped a 2007 Volvo for a traffic violation at around 11:37 p.m. on Albany Street near New Karner Road.

The driver, Wayne Samuels, 25, of Schenectady, had a suspended driver’s license and there was allegedly an odor of marijuana emanating from the vehicle.

As officers asked Samuels to get out of the vehicle, he allegedly reached into his waistband and tried to pull out a handgun. The officers were able to get him handcuffed and removed a loaded Springfield 9 mm handgun.

The origin of the weapon is not known and still being investigated. Samuels does not have a state issued pistol permit and can’t legally possess a handgun in this state because of two previous felony convictions.

He was arrested in April for allegedly firing rounds into an occupied vehicle and into a residence. The charges of attempted murder are pending, Winn said out of Schenectady County.

He was taken to the Albany County jail without bail.

FAMILY NOW: How to clean and sanitize a backpack