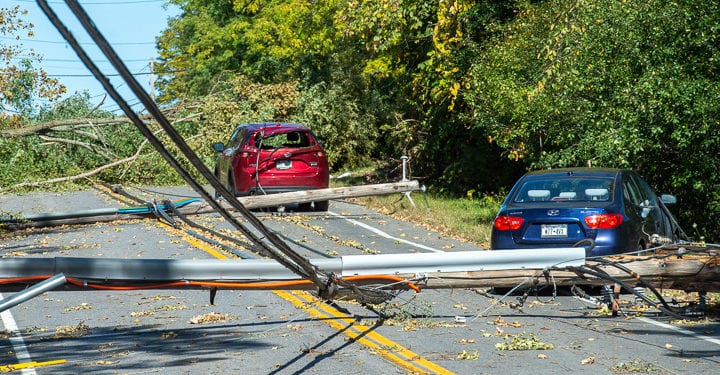 There are still nearly 60,000 people without power across the Capital District as crews continue to clear trees, install new poles and restore transmission lines downed from the fast-moving storm that hit on Wednesday afternoon.

Albany County Sheriff Craig Apple said there were two house fires caused by people using generators improperly. He said they must be kept outside with the gas a safe distance away and not in a house or a garage.

The Albany County 911 center fielded 2,609 calls within two hours, Apple said during a press briefing on Friday, with 980 coming from the Town of Colonie.

One call he said, had nothing to do with the storm, but a dispatcher talked a mother through the birth of a baby that wasn’t expected for a few more weeks.

“She talked her through the childbirth and tied off the umbilical cord and our paramedics got there and took mom and the baby by ambulance to the hospital to deliver another one,” he said.

Because of so many roads closed by felled trees, the ambulance had to use a crash gate to get on the state thruway. A tractor trailer hit the back of the ambulance, he said, and while a paramedic suffered minor injuries, the mom and preemie were fine and made it to the hospital to deliver the twin.

“I believe everyone is doing well at the hospital,” Apple said.

Meanwhile, National Grid has some 2,000 employees and contractors working on restoring power but it could be until Sunday for the harder hit areas of Albany, Schenectady and Rensselaer counties.

ON THE BOOKSHELF: Fall days are perfect for reading (adult)