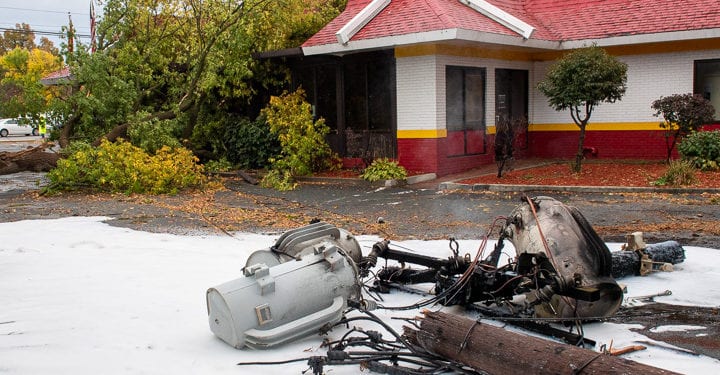 A fast moving, powerful storm felled tree limbs and knocked out power to some 160,000 people across the Capital District on Wednesday, Oct. 7

At the McDonalds on Troy Schenectady in Colonie, a tree fell into a pole holding a transformer and then onto the restaurant. The transformer caught fire in the parking lot and crews from Verdoy and the Albany Airport answered the call.

There were no customers in the restaurant at the time, said Verdoy Chief Ryan Carmichael, and the four or five employees were not injured and were evacuated.

“There was a heavy fire condition when we got here,” he said. “I was on my way to a call for Vly Road and drove by this and came here instead. The restaurant is closed until at least the power comes back on and the tree is cleared up.”

After taking out the power pole, the tree toppled across the drive thru entrance and onto the restaurant. It was too early to tell if there was any structural damage and no indication on how long the restaurant will remain closed. After the fire was extinguished, hazmat crews were working to contain residue — oil from the transformer and foam to put out the fire since water cannot be used on electrical fires — to the site and not allowing it to spread.

In other areas of Colonie, large tree limbs closed a number of roads including Riverview Road, Vly Road and Wade Road Extension.

“Crews will continue to work around the clock to restore power as quickly and safely as possible in challenging conditions,” said Patrick Stella, a spokesman for National Grid. “The company’s first priority is to ensure the safety of our customers and our crews by clearing away dangers such as live, downed power lines.”